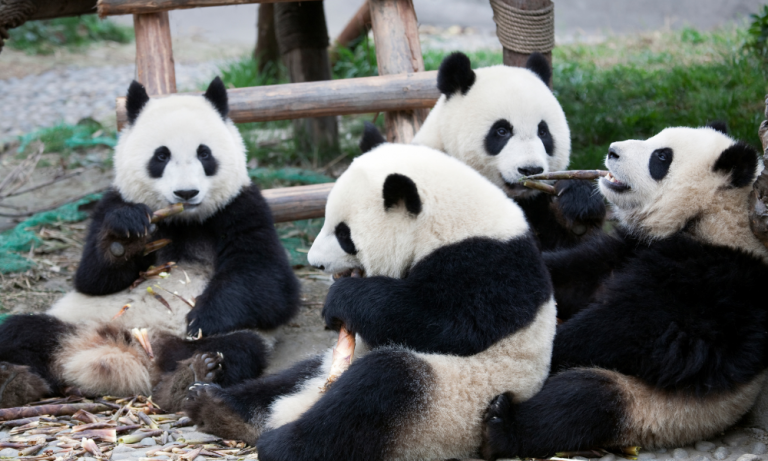 For some time now, there has been so much effort in conserving pandas around the world. Ironically, they face many dangers in the wild but their own lifestyle threatens their survival rate.

That’s right! Pandas are bad at surviving on their own, and here are the reasons below!

Their “Bamboo Diet” or Nothing

Pandas eat almost nothing but bamboo. And since this plant is low in nutrients, they spend more than half a day eating it to meet their daily nutritional requirements.

However, as natural carnivores, pandas occasionally hunt and feed on smaller animals in their habitats. They can’t survive on meat despite being able to digest it more than bamboo.

This is because pandas lost their interest in meat and made bamboo their favorite food. Hence, for pandas, meat or any other food can’t replace their bamboo; not even other plants!

This makes it harder for them to survive, especially in situations where they experience a bamboo shortage.

Giant pandas are considered poor breeders. This greatly affects their survival rate both in the wild and in captivity.

In addition, female pandas can only give birth only once a year.

Did you know that a female panda can only have about 2-3 days to get pregnant?

So even if a male mates with a female on time, there is still a high chance it’ll be unsuccessful. That’s how pandas are terrible at mating!

When pandas don’t get pregnant within these few days, every hope of reproducing is lost that year.

Even zoos battle with this poor breeding situation. So breeding pandas isn’t easy at all even with human help.

RECOMMENDED READING: HOW DO PANDAS REPRODUCE?

Pandas begin to have a hard time surviving at their early stages. Giant pandas’ pregnancy lasts for a short time, about 95 -160 days.

However, the result is always a tiny cub that’s just so little compared to their mom’s size. Panda newborns are not well developed and are helpless.

As a result, it’s not easy for these cubs to survive, especially in the wild.

In captivity, panda babies still die after birth even with human efforts. Funnily, females can only take care of one cub. This means that they abandon a cub if they have twins.

From this, you can see why pandas aren’t good at naturally increasing their population in the wild.

Giant pandas are clumsy creatures and it’s natural. It makes them act like they are drunk all the time. Pandas fall from trees, roll around, and lose their balance many times.

Their clumsiness is equally one of the reasons why these creatures are fun to watch.

However, this behavior makes surviving hard for pandas. An animal needs to be as careful as possible to survive in the wild.

But the case of giant pandas is far from being careful. In the wild, they can easily get into trouble and have accidents due to their clumsiness.

Pandas are solitary animals and this doesn’t help them at all. Many animals live alone but are very capable of surviving alone.

Most animals boost their survival chances by living in groups and families. Finding food and protection is always easier in numbers.

Pandas are the kind of animals that anyone will suggest should live in groups. In zoos, these carefree animals have humans to watch their backs.

However, in the wild, it’s a different case. They stay all by themselves. This means they don’t protect themselves or even warn each other if they spot dangers.

In addition, it’s mostly during mating times you’ll see pandas together in the wild. And the funny thing is that males leave as soon after mating.

So female pandas nurse and raise their cubs all by themselves. Surviving like this isn’t easy at all!

Difficulty Adapting to a Natural Habitat Outside China

A panda’s natural habitat is in China. It is surrounded by a cool and wet broadleaf forest with lots of bamboo growing in it.

However, this doesn’t mean giant pandas can survive in any bamboo forest around the world. Not at all! Giant pandas need at least two species of bamboo to survive.

A report by Wenyue Hsiung (a Professor at Nanjing Forestry University, Nanjing, China), revealed that there are about 400 bamboo species in China.

However, it’s more than just the presence of bamboo for a place to be called their home in the wild. Most of the bamboo forests around the world lack the ideal environment for pandas.

It could be the elevations, range, climate, and forest that are more common in China.

Therefore, it’s just difficult for these creatures to live in the wild anywhere outside China.

As they suffer the loss of habitat, it affects their survival in the wild. But if pandas were to live anywhere outside China, they can only be in Zoos under human care.

What is Pandas’ Survival Rate in Captivity?

Amazingly, the survival rate of pandas born in Captivity is over 90%. This is due to the efforts panda experts have put into creating good conditions for panda breeding in Captivity.

And the result is great as the number of pandas born and raised in zoos keeps increasing. What’s more, twin panda cubs can both survive in Captivity.

This percentage compared to the present one shows that there has been a lot of improvement over the years in raising pandas in captivity.

Breeding these creatures isn’t easy but there are far more successful births in captivity than in the wild.

What are Giant Pandas Survival Skills?

One of the things pandas are good at doing is hunting for bamboo. Since they need lots of bamboo in a day, they need to find plenty of it every day.

They’re strong enough to break down and tear bamboo stalks. Moreover, pandas can differentiate between fresh, green bamboo, and brown ones.

It’s quite remarkable despite their difficulty in differentiating colors.

Giant pandas are excellent tree climbers. It’s just too surprising for creatures that are chubby and almost as round as balls.

Interestingly, this climbing skill comes in very handy in many situations. Pandas can sleep a lot when they’re not eating. And most times they like to do it on trees where it’s safe.

Sleeping high in trees keeps them away from the dangers on the forest ground. Moreover, giant pandas can climb so high to treetops where they sunbathe during cold times.

Pandas build dens in the wild soon before they give birth. It’s mostly as a shelter and protective area for their cubs to stay in.

Giant pandas mostly use hollowed-out tree stumps or logs for the outer structure of their dens. They make the nest more comfortable for their cubs to stay by making a nest in it.

RECOMMENDED READING – WHAT DO GIANT PANDAS NEED TO SURVIVE?

To sum up, giant pandas are bad at surviving due to the following reasons:

Now, aside from pandas being bad survivors, many factors threaten their existence in the wild. Seems like pandas get trouble from every angle.

Giant pandas face a lot of dangers in the wild and here is why.