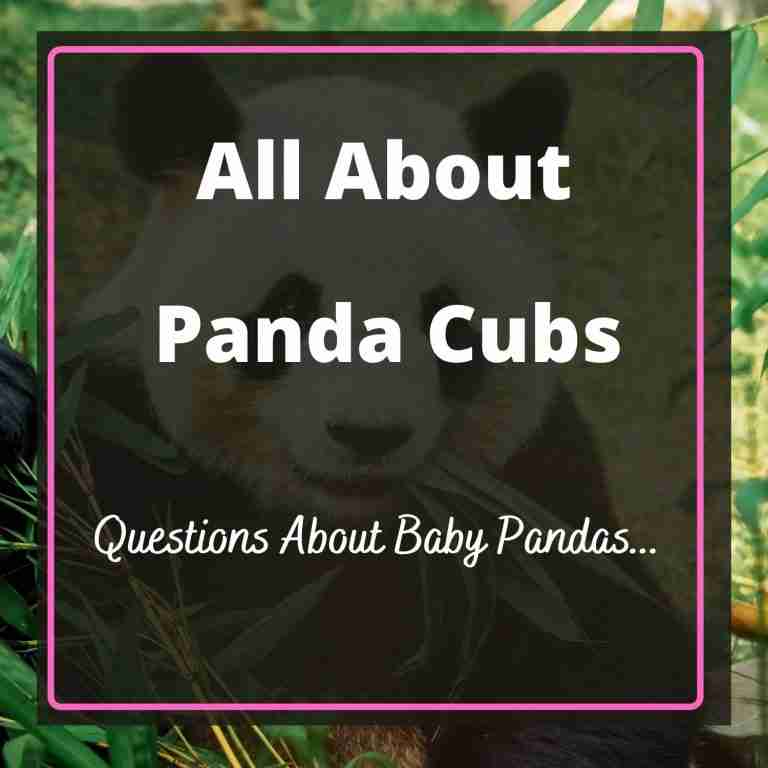 Although tiny, baby pandas are definitely wonderful creatures. So if you’re a panda lover, you may want to find out many things about these babies.

Keep on reading to know all about them!

What Is A Baby Panda Called?

Since the pandas belong to the bear family, their babies share a name with them.

A panda cub always looks very tiny, pinkish, has no hair, and is blind. In fact, the baby pandas look nothing like their mothers.

But around 3 weeks to 1 month, their black and white fur begins to grow gradually.

Sometimes, most baby pandas die in the wild because they are unbelievably small and thereby helpless. Although the pandas feed on their mother’s breast milk for a year, they can eat bamboo at six months.

Within a year, their sizes and furs begin to look like that of the pandas we are familiar with.

How Much Does A Panda Cub Weigh?

Often, panda cubs weigh 0.18 to 0.31 lbs (3 to 5 ounces), which is very small compared to their mother’s size. We can compare the baby pandas’ weight to a baseball because while holding one, you won’t feel tired.

No wonder a lot of people who see these cubs for the first time do not always believe they are ‘real’ pandas.

Surprisingly, the baby pandas are among the smallest newborn mammals considering their mothers’ large size.

However, these babies grow fast when they constantly feed on breast milk from their mother and eat bamboo.

How Long Do Panda Cubs Stay With Their Mothers?

Mostly, panda cubs stay with their mothers for about one and a half to two years. As we mentioned earlier, baby pandas are helpless at birth.

Not only are they blind and deaf, but they are also unable to walk and release waste products by themselves.

So the mother panda is faced with the job of regularly feeding, and protecting her babies. Also, she ensures the cubs urinate and defecate by continuously rubbing their stomach.

In Captivity –  The zookeepers usually take the abandoned cub into their care. They also change the babies while the panda is not looking, to ensure both cubs feed on breast milk.

NOTE:  Most panda cubs leave their mother once she gets pregnant again.

Why Do Pandas Lick Their Cubs So Much?

Mother pandas lick their cubs to help them defecate and urinate easily. In the first few weeks after birth, baby pandas cannot release waste by themselves.

By licking them, the panda is ensuring that her cubs can pass out urine and feces freely.

Why Are Panda Cubs So Cute?

According to Edgar E. Coons, a behavioral neuroscientist, pandas are cute because their features remind us of human babies.

Considering their noses, big eyes, round cheeks, and large heads, the panda cubs trigger a baby instinct in us. Besides, the way they roll around and stumble while walking is somewhat similar to how human babies play.

Neuroscientists believe that these characteristics in pandas stimulate a part of our brain thereby making us love them.

Can You Pet A Panda Cub?

No, you cannot pet a panda cub because laws have been put in place against taking such action.

All pandas are owned by the Chinese government, including those in different zoos across the world. One major aim of China as regards the pandas is to ensure the animals don’t go to extinction.

As a result of this, you may go to prison or pay a huge fine for keeping a panda cub as a pet.

Besides, baby pandas are tiny, weak, and helpless at birth. So petting these animals is not advisable because you won’t be able to care for them like their mother. And without enough care, the panda cubs may die.

How Much Is A Panda Cub?

Being one of the popular symbols of China, pandas are not for sale. However, the Chinese government rents them out to zoos in different parts of the world.

One surprising thing you should know is that renting pandas is not cheap at all.

As of now, most zoos rent a panda for about $1 million yearly. Bear in mind that this cost doesn’t include feeding, enclosures, medical care, and other expenses.

So it is fair to say that pandas are expensive creatures.

But you can always visit some zoos in the US, China, Canada, UK, Japan, and other countries to see pandas.

Before you leave, keep a few key points in mind.

Baby pandas are known as cubs. They usually look pinkish, tiny, and furless at birth.

Also, panda cubs weigh around 3 to 5 ounces and can stay with their mother for up to 2 years.

Pandas lick their young so much to help them urinate and defecate easily as they are unable to do so on their own.

Finally, you cannot pet baby pandas because it is against Chinese law and these animals are also not for sale.

Did you find this article informative? Share with other panda lovers on social media!