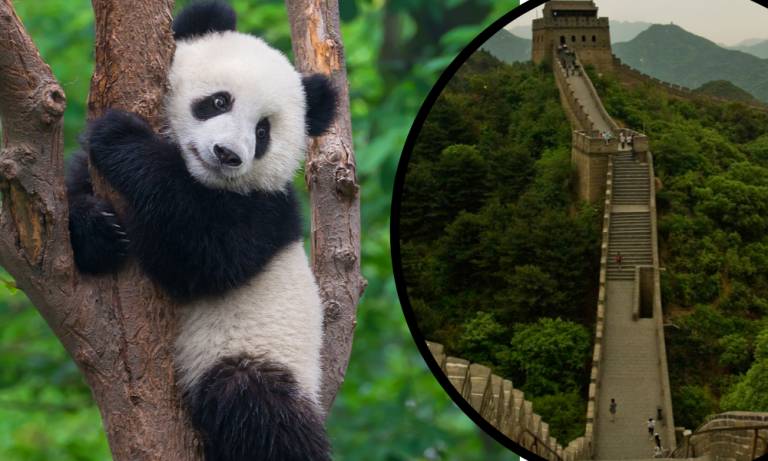 Talk of China, and the first thing that comes to your mind is probably The Great Wall and their martial arts. In addition, you may have thought of Kung Fu Panda too!

Speaking of pandas, does it mean they live in China?

Yes, the giant panda lives in China. In fact, they are regarded as a national treasure in China.

According to the National Zoo, giant pandas can only be found in hilly areas of China, the southern provinces of Sichuan, Shaanxi, and Gansu.

They can be found in the cold, wet bamboo forests between 1,524 and 3,048 meters above sea level. In addition, you can discover dens for giant bears in the woods in the form of hollowed-out logs and stumps of fir trees.

Now that you know that giant pandas live in China, you may be asking why it can only be found there?

Well, let’s get down to it and learn more about the panda.

Why Do Giant Pandas Only Live in China

Well, here are a few reasons why giant pandas only exist in China;

The Minshan and Qinling mountains are home to most wild pandas. The WWF has been working with the Chinese government to protect the giant panda by establishing new reserves and expansion of the existing ones.

More than 66% of wild giant pandas and 54% of their habitat are currently protected in China’s 67 panda reserves.

To link up remote forest areas, the Chinese government and WWF have built bamboo corridors. So pandas can find more food and interact with more potential mates by expanding their range.

In its original range, the giant panda once roamed freely in southern and eastern China and Myanmar, and northern Vietnam.

However, human encroachment on their habitat restricted their free space.

Currently, there are just 20 isolated pockets of bamboo forest in six mountain ranges in China’s Sichuan, Shaanxi, and Gansu provinces, where the species historically thrived.

Most giant pandas can be found in Pingwu county in China. This is because of the lush forests of the Minshan mountains.

They also have a wide variety of different species, including small blue lambs and magnificent multicolored pheasants.

Shaanxi Province’s Qinling Mountains are a significant divide between northern and southern China. They shield the south from the cold air from China’s northern regions.

Natural barriers, The Minshan Mountains separate the congested provinces of China’s south and east from the massive Tibetan Plateau, the world’s tallest and largest plateau.

This mountain range cuts through Sichuan and Gansu provinces from north to east. It is situated in one of the country’s most important watersheds.

Warm rains have resulted in lush vegetation on the mountain’s southern slopes.

As a result, many pandas and other endangered species live in the highlands, including the golden monkey and the crested ibis. Both of them live in the mountains.

Additionally, the mountains have a long history of local human settlement.

RECOMMENDED READING: What Are The Giant Panda’s Habitat?

The giant panda survives with bamboo. On average, a panda can eat 28-84 lbs of bamboo everyday. This means that they heavily rely on bamboo as their primary source of food.

Without China’s rich Bamboo forest, it would result in food shortage and they may die.

Giant pandas may climb up to 13,000 feet to find food on the higher slopes of mountains.

For the most part, pandas live in the mountains of southwest China, where bamboo is their primary diet.

To connect the several regions of giant panda habitat, afforestation of the bamboo forest has taken place in zones between them. If there is not enough food, giant pandas can now relocate.

Reforestation programs are also underway to expand their habitats to create room for pandas.

Why Does China Care About Pandas?

China cares about Pandas because of two things – to protect their population & to promote diplomacy.

Since they are “loners”, it’s very difficult to breed pandas even in captivity. This is why the giant pandas require extra supervision to increase their numbers.

Thanks to China’s conservation program, the Giant Pandas are no longer considered endangered.

In addition, giant pandas serve as diplomatic symbols. This means that China sends giant pandas to other countries to build good relationships with them.

Giant Pandas live in China thanks to the country’s conservation efforts, but their population remains small because of their behavior.

Due to China’s ideal habitat, the Giant pandas continues to survive.

China’s recent efforts on the program include; expansion of the giant panda’s habitat, and building bamboo woods to provide the pandas with food.

If you find this article helpful, share it with your panda-lover friends!