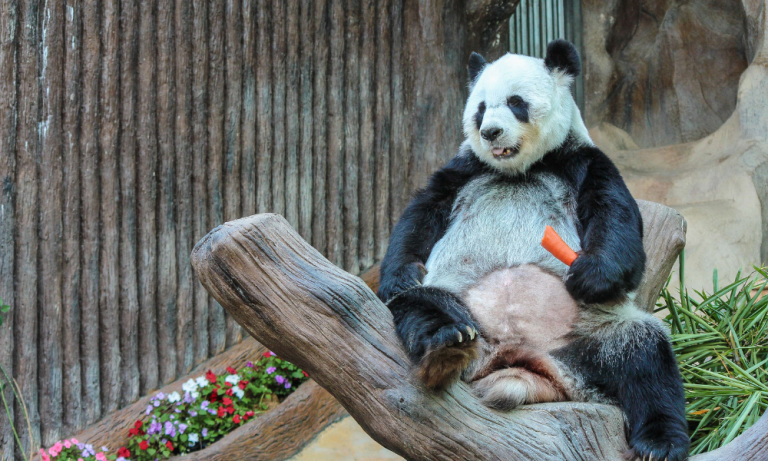 Giant pandas have natural habitats, which can be found in China. However, many of them are finding new homes in zoos around the world.

For this reason, you might be wondering why zoos keep pandas.

See the reasons below!

Pandas have earned themselves so much fame over the years. They are very entertaining and people love to see them very often.

Hence, keeping pandas in zoos allows people to meet them. You wouldn’t have to go to China if you want to see one. Pandas’ presence in zoos pulls crowds.

Therefore, if a zoo isn’t having many visitors, they should probably get a panda!

Pandas are rare and over 1,800 are in the wild. However, their population is greatly affected by many factors that keep endangering them in the wild.

And these problems brought about their conservation. In addition to this, a part of panda conservation involves protecting their population. So this resulted in keeping most pandas in zoos.

When pandas are in zoos, they are safe from the threats and harsh conditions they face in the wild.

Some pandas are kept in zoos to zoos to partake in breeding programs. It’s a safe place to produce more pandas.

Pregnant or nursing pandas in the wild face threats that limit the rate at which their offspring survive. However, these threats are absent in zoos and pandas breed better with human support.

Over the years, zoos have had much success in breeding pandas despite not being an easy thing to do.

And one of the things zoos take into consideration is the genetic diversity of pandas.

So, it’s not just about producing more pandas, but mostly healthy pandas. Above all, the breeding of pandas in zoos has been the best way to grow the panda population.

A giant panda’s abitat that’s pretty comfortable for them.

Moreover, this is why China is the only country where pandas can freely live in the wild. So this equally means that every other country is a foreign place for pandas.

And since pandas can’t live in the wild in another country, they will have to stay in zoos. Despite zoos are not pandas’ natural environment, they offer the care and protection pandas need to survive.

In addition, most zoos create their pandas’ sections similar to their habitats in the wild. This is to make these lovable creatures as comfortable as possible.

It’s important to keep studying and monitoring giant pandas to help save them.

Zoos make it possible to monitor giant pandas more carefully and closely. Pandas kept in zoos (captivity) allow scientists and researchers to study more about the lifestyle of these creatures.

In addition, the more scientists know about pandas, the better they can improve their existence with effective conservation approaches.

Do All Zoos Have Giant Pandas?

Not every zoo has giant pandas! They are not the kind of creatures that zoos can have easily. Moreover, giant pandas aren’t common. They only live naturally in China.

And in China, they are national treasures. So if a zoo wants to keep a panda presently, it has to be based on loan agreements with China.

Zoos outside China have to pay about a $1,000,000 loan fee every year to keep a panda! It equally involves a practice known as China’s panda diplomacy.

So not every zoo can have a panda even if they can take care of one.

Hence, only a few zoos have had pandas over the years. Furthermore, it’s both challenging and costly to care for one and most zoos aren’t capable.

READ FOR FULL GUIDE: WHAT ZOOS HAVE GIANT PANDAS?

How Do Zoos Treat Pandas?

Zoos treat pandas like treasures! Pandas living in zoos receive the kind of attention that can make other animals feel jealous.

Furthermore, when it comes to their feeding, captive pandas eat better. Zoos do not only serve pandas varieties of bamboo but also add tasty and nutritious treats to their diet.

In addition, pandas feel this love, and most of them, both the young and old, bond pretty well with zoo keepers. Pandas are the kind of animals that become stars immediately after they arrive at any zoo.

How Long Do Zoos Keep the Pandas?

How long a panda can stay in a zoo depends entirely on the loan contract. And this contract basically involves a 10-year stay in a zoo plus the yearly loan fee.

So this means zoos can keep pandas for up to 10 years. In addition, zoos can still renew this contract after it expires.

It could either be for another 10 years or less. Nevertheless, if a zoo does not renew the contract at all, then the pandas will have to be returned to China.

It costs a lot to keep pandas in zoos. Not only because they belong to China, but also the kind of care they need.

But why do they get all these special treatments? It’s because giant pandas matter to the world. And here are the reasons why!