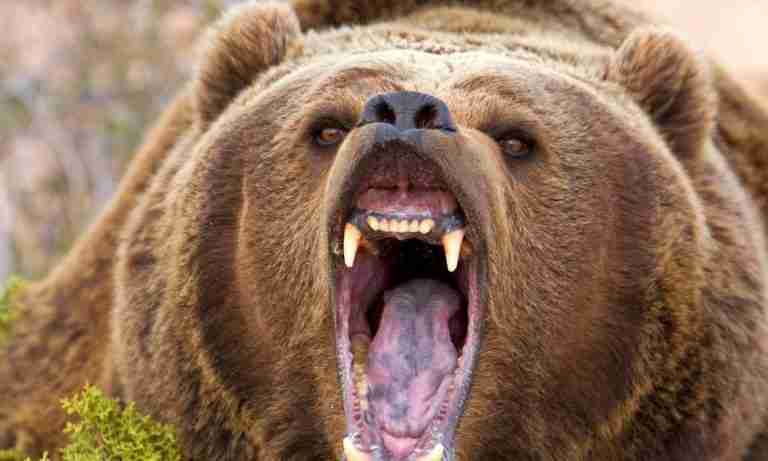 Grizzly bears are strong predators in their food chain. In fact, I’ve just seen a video where a bear is aggressively attacking its prey.

Could there be a reason why grizzlies have violent behavior?

In this article, I will discuss the reasons, and signs of their aggressiveness. In addition, you’ll find out what to do when encountering them.

3 Reasons Why Grizzly Bears Are Aggressive

When They Feel Threatened

Grizzly bears try their best to stay away from trouble.

They are excellent predators of many animals and do not have major threats except humans.

Adult grizzlies will rarely be afraid of any animal. However, their cubs are their major concern at all times.

So whenever they are threatened or endangered, female grizzly bears become aggressive to defend and protect their cubs.

When They Are Hungry

Grizzly bears are animals that eat meat as well as plants.

With their strong sense of smell, they can sense a freshly killed animal, dead carcass, or even packs of food in your bag!

So, when they smell this food from a distance, they become aggressive.

When You Invade Their Territory

Over the decades, grizzly bears have had several encounters with humans.  Most of the time, it doesn’t usually end up well.

Their poor sight and hearing ability make it difficult for them to know when one sneaks in.

It’s no surprise that even with the laws against hunting grizzlies, they still fear humans. And in some situations, their reaction can be aggressive.

Thus, it is good to make a lot of sounds to tell your presence when entering a grizzly bear’s territory.

Now that you’ve learned the reasons for a grizzly’s aggression, won’t you love to know the signs that show it is getting aggressive?

Signs That A Grizzly Bear Is Getting Aggressive

Here’s a list of warning signs that grizzly bears are stressed and are getting ready to charge.

Encountering A Grizzly Bear – What Should I Do?

Before you go camping, it is necessary to know what to do when you encounter a grizzly bear.

Running may be the first thing that comes to your mind. But it is not advisable as the bear may see you as a threat and chase after you.

According to experts, the best thing to do to increase your chances of survival is not to run.

Stand still and avoid making eye contact with the grizzly bear, then walk away slowly.

But if it hears you make a sound, don’t shiver, stand your ground because you cannot run more than it can run.

Make sure not to shout or scream.

Talk in a soft tone with a low voice and wave your hands to let it know you are a human being, not a threat.

If you have pepper spray with you, use it on the grizzly bear in case it tries to attack you.

But if it resists that strategy, roll up yourself like a ball or lay flat on your belly. while doing this, do not make a sound.

Remain as calm as possible until the grizzly leaves the scene.

Also, ensure that it has left the environment before you stand up to call out for help.

Are Grizzly Bears The Most Aggressive Bear?

No! Grizzly bears are not the most aggressive bear.

Although they are on the list of aggressive bears, the polar bear is the most aggressive.

Polar Bears are large and white, their body is covered in white fur or brown coloration in some cases.

Polar bears are the most dangerous bear and land carnivores that can never be afraid. Instead, they break the bones of other animals in one bite.

Are Grizzly Bears Aggressive Than A Black Bear?

When black bears are threatened, they run away or climb trees faster than their predators.

Grizzlies do the opposite! When they are frightened, they become aggressive and ready to attack.

These differences in behavior are due to their evolution.

Both bears evolved 2 million years ago from Etruscan bears in Asia. These Etruscan bears lived in the forest and climbed trees to run away from danger.

Black and grizzly bears came into North America from the land bridge bordering Alaska and Asia.

When they arrived, the black bears stayed in the forest and continued climbing trees just like the Etruscan bears.

Grizzlies explored more and adapted to more territories like Islands. hence the differences in strength and aggression.

Are Grizzly Bears Aggressive Than A Polar Bear?

No, polar bears are more aggressive than grizzly bears. The only predator that a polar bear has is a human being.

For example, in the northern part of the Norwegian islands of Svalbard, polar bears are abundant in the population.

They are so aggressive that whenever they come outside their territory, the only way to chase them is by using firearms.

Are Grizzly Bears Aggressive Than A Brown Bear?

Grizzlies are also called brown bears but their habitat differentiates them from other brown bears.

They are inland bears while the other brown bears are coastal dwellers.

The grizzly’s hibernation makes them smaller and more aggressive than coastal bears.

To recap, grizzly bears become aggressive when they are threatened, hungry and when their territory is invaded.

Before their aggression, they clack their teeth and sway their heads, ready to attack.

If you encounter any, don’t run, stay still until it leaves, or walk away quietly.

Among all the bears, polar bears are the most aggressive.

It’s very clear to you now the reason why grizzly bears are aggressive.

But do you also know that their aggression is not in vain, they kill and eat their prey? Check out our article “ Do Grizzly Bears Eat Meat”