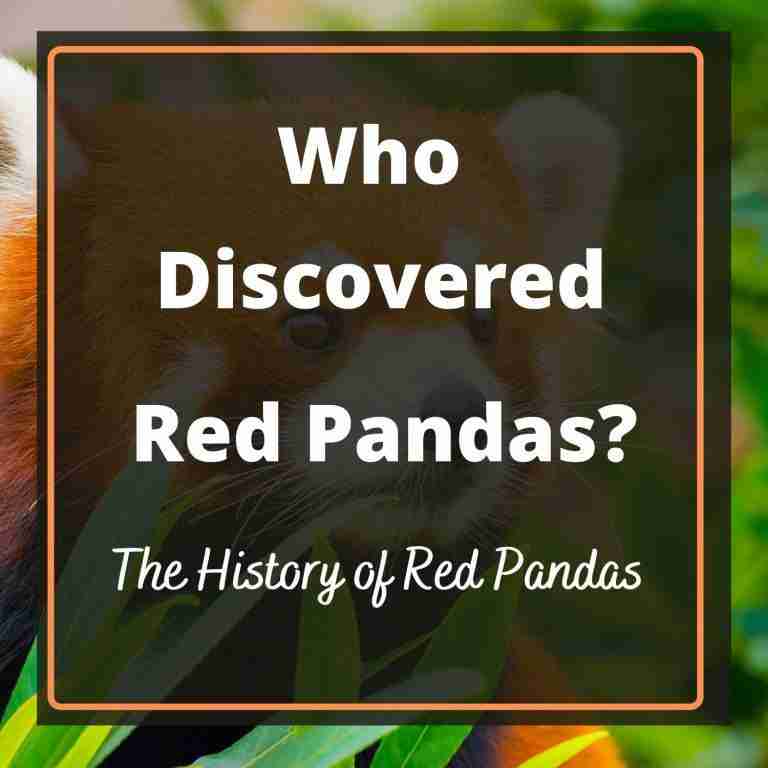 Who discovered red pandas? This is a common question not just for red pandas, but also for any species in the world.

Besides, all species in the world were once unknown, until someone discovered and classified them to which group they belong.

The quick answer to the question is Frédéric Cuvier (Georges-Frédéric Cuvier). He is a French zoologist who first classified and described red pandas.

Now that you know who discovered red pandas, you may also want to know when was the first red panda discovered? Plus, did they discover them before the giant pandas?

Well, there is surely more to know and discover about red pandas in this article.

Let’s go ahead and find out more facts about the red panda discovery.

When Was The First Red Panda Discovered?

The first red panda was discovered in 1825. This was 48 years earlier than the discovery of the very popular giant pandas.

Back in 1825, Frédéric Cuvier was the first one to describe and document these animals. He also proposed a scientific name for them, which is Ailurus fulgens.

Thus, he takes the credit for discovering the red pandas.

Well, we can say that there were people who saw red pandas earlier than Frédéric Cuvier. You might wonder who they are, right?

Well, they are definitely the people or locals in the place where red pandas live naturally.

Where Was The First Red Panda Discovered?

The first red panda was discovered in the Himalayas, which is located in the north of India. The Himalayan mountain range is found across India, Pakistan, Afghanistan, China, Bhutan, and Nepal.

Back in 1825, Alfred Duvaucel sent a zoological specimen of a red panda to Frédéric Cuvier, the first zoologist to describe the animal.

In case you are not familiar yet, a zoological specimen is an animal or part of an animal preserved for scientific purposes.

Red pandas are endemic (naturally existing in certain places) to the following countries:

Unexpectedly, red panda fossils dating back as far as 5 million years have been discovered in North America.

This is unusual, considering they only exist in some eastern or Asian countries like those listed above.

Most of the time, they are found on trees in some mountainous territories of the Himalayas with an elevation of 4000 feet.

How Did The Red Panda Get Its Name?

In taxonomy, the scientific name of the red panda is formed by combining its genus and species.

Most animals, not just red pandas, get their names from the species where they belong or the physical characteristics that they have.

Let’s take the red panda as an example.

They are given the scientific name, Ailurus fulgens, which means a shining cat or a fire-colored cat.

Apart from the scientific names, animals can also have local names originated from the native or indigenous people around the Himalayan region

Here are the local names for the red pandas :

Frédéric Cuvier is the first one to use the word panda as the name of the animal. There is no clear history about the creation of the word panda.

However, there are some guesses that he derived the name from their native name poonya, which means eater of bamboo.

Fun Fact: Did you know that the red pandas were the first to be called pandas and not the giant pandas?

Just like any other animal, red pandas have English names for a better understanding of people around the world.

Here are their English names:

Moreover, you also found out the different names of the red pandas both in the native and English languages.

Well, we can say that the discovery of every creature in the world is very important. This way, we can recognize them as part of this world.

At the same time, we can know more about how they contribute to the balance in our nature.

Here are some articles that you may also find interesting:

1. Some people claim that a red panda is a fox and not a bear. Is it true?

3. The giant pandas live naturally in Central China. What about the red pandas?

Good job on reading this article! I hope that I gave you the answers you are looking for.