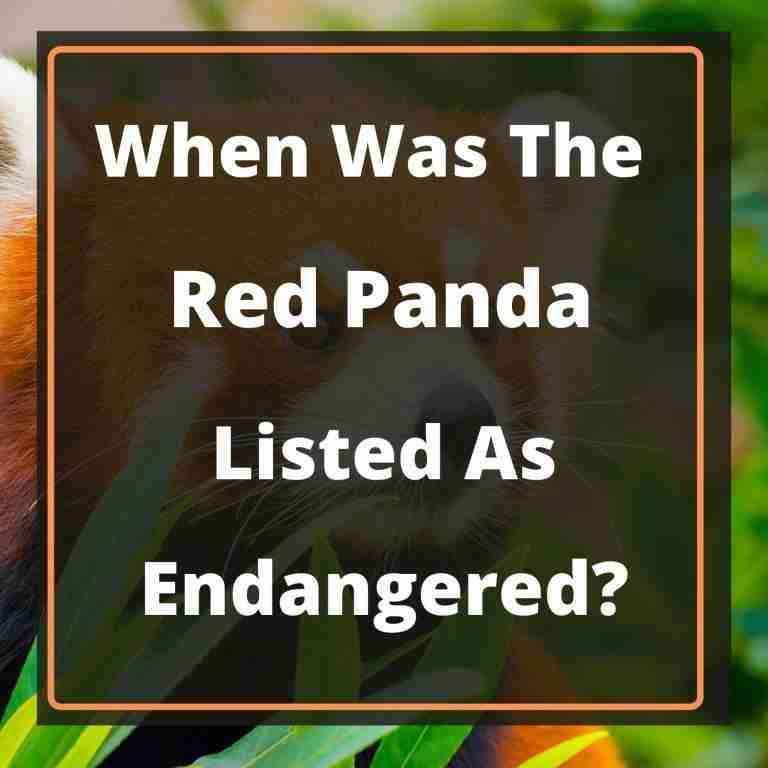 Red pandas are rare creatures that are native to only certain parts of Asia. In addition, these creatures have been listed as endangered species.

However, you might ask – when was the red panda listed as endangered?

The red panda was first listed as endangered in 2008 by the International Union for Conservation of Nature (IUCN). This is a long time ago and this hasn’t changed.

However, among the seven categories on the IUCN red list of threatened species, the red panda is among the “endangered” species. However, not too far from extinction!

Are red pandas no longer endangered or are they already extinct?

Are Red pandas Still Endangered in 2021?

Yes, red pandas are still endangered in 2021. It happens that these creatures still face many threats in the wild.

In addition, there are still few red pandas in several conservation centers, like zoos, around the world. These zoos take care of red pandas and also aim to improve the population of these creatures

How Did Red Pandas Get Endangered?

Red pandas became an endangered species due to the fact that their population kept on reducing. It’s quite unfortunate that they only cover a few parts of their habitat area.

However, it all happened due to both natural threats and more caused by humans, especially natives of their habitats.

Let’s look at some of these factors that made the red pandas endangered animals.

A red panda’s habitat is unique to them. They find it very hard to adapt to another environment, unlike raccoons that are somewhat related to them.

Even a change of diet is impossible as they feed mainly on bamboo leaves and small shoots. This is why the different forests they live in are all alike in many ways.

They all have things that are important for the survival of these creatures. A common one is that lots of trees must be in that area as red pandas shelter mainly in trees.

Also, what’s more important is the presence of different species of bamboo. Without this, you can never see a red panda in such an area in the wild.

Over the years, these creatures have been greatly affected by habitat loss. Most of the causes are from many human activities on the red pandas land, which are:

Moreover, forest fires and natural disasters, like floods, landslides, etc. all affected the red panda habitat as per IUCN reports. The commercial logging and clearing of the forest just kept these cute creatures homeless.

Red pandas also face a lot of physical threats from humans. Most of the people around the red pandas’ habitat hunted these creatures for many purposes.

Their beautiful furs were used to make hats. Also, the people believe the red pandas have some medicinal value. Some red pandas just get trapped accidentally in traps meant for other game animals.

However, the hunters still don’t release them but sell them in the markets. There have been many cases where these creatures were sold as pets.

The buying and selling of the red panda just made all of these made the hunting, poaching, and killing of these creatures very common around their habitats.

Less than 10,000 red pandas are left in 2021. It’s been more than 10 years now and these creatures are still listed as endangered.

The red panda population is still reducing, especially in the wild. With the efforts made to increase their population, the numbers in the wild still decrease.

If this keeps happening, the red pandas might move from being just endangered to a worse situation. We might just have very few of them left.

How To Prevent Red Pandas From Being Endangered

Laws Against Hunting and Trade of Red Panda

The governments of the different Asian countries where red pandas live have banned hunting of these creatures. Despite this, the natives of such are still practicing them.

So, simply banning the practice is not enough. Strict laws should be made against it also with more strict measures.

These hunters and poachers should face heavy penalties and fines when caught.

In addition, whenever they break these laws the government can go as far as imprisoning them. It’s also important to organize a team to monitor these practices.

They can be a group of people living in these habitats who are against such practices too. Even installing CCTV cameras around the red pandas’ habitat can help to monitor these activities.

All of these can help to control the illegal human activities that keep endangering these creatures.

The clearing of the forest and cutting down of trees has greatly endangered the red panda. It deprives them of both shelter and food in their habitat.

However, a way to help them survive is by making more trees and bamboo available for the red pandas in the wild. These are very important for their survival.

The government and panda organizations can locate certain areas in their habitat, especially affected ones, and plant more trees in them.

Doing this will help to restore many red panda habitats that were destroyed.

Educating People on the Need to Save the Red Panda

There’s a need to educate people, especially the natives, on the importance of preserving these creatures and their habitat.

Also, spread awareness on the risks of deforestation and other practices that greatly affect the red panda and their environment.

Knowing this, they’ll be careful of the activities they do in the red panda’s habitat, especially if it’s going to bring harm to them.

Organizations like the World Wide Fund for Nature (WWF) and Red Panda Network (RPN) have both roles they play in protecting these creatures.

They help to conserve the red pandas in the wild and also restore their habitats.

You can donate to WWF or RPN on their websites.

In summary, the red panda has been listed as endangered since 2008. Even to date, these cute creatures are still endangered.

Threats like habitat loss and animal poaching keep reducing their numbers in the wild. However, several steps can be taken to prevent the red pandas from being endangered.

You can also read more about the red pandas on more of our blogs. There you’ll get more information about their lifestyle.

If this content was helpful, you can help support the red pandas by sharing this with your friends!