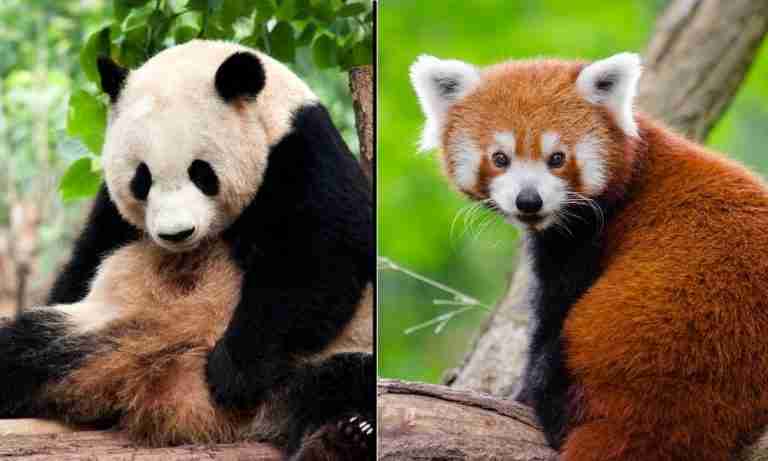 Giant pandas and red pandas are the only type of pandas that are still existing in the world. They are different in many ways, but still have a lot in common.

In this article I will be discussing the detailed similarities of giant pandas and red pandas.

Bamboo-eating is something these two creatures mainly have in common. They are both one of the few bamboo eating animals in the world.

Bamboo makes up the most of both the giant panda. In fact, they eat so much in a day. Their love for bamboo is the reason they’re both considered herbivores despite being naturally carnivores.

Both the giant panda and red panda digestive system is meant for breaking down meat rather than bamboo or any other plants.

It’s amazing how the two pandas chose plants over meat!

Interestingly, among every plant, both of these creatures chose to survive mainly on bamboo – a plant with low nutrients!

There’s one similarity every one sees, which we also look at. And that is their naming. These two creatures are named pandas – the “giant panda” and the “red panda”.

Giant pandas are the bigger pandas and that’s why they have the part, “giant”, attached to their name. Red Pandas, on the other hand, are actually the smaller ones and the ‘red’ part of their name has to do with their fur.

In addition, they’re both called pandas for a reason. And red pandas were the first to earn the name. Moreover, it came about from their bamboo eating nature.

Giant pandas were later named pandas owing to the bamboo-eating similarity they share with red pandas.

However, you should know that this isn’t mainly about being just a bamboo eater.

It has to do with the fact that these creatures survive almost entirely on bamboo. Interestingly, the two creatures are the only species of pandas in the world.

If there were any species like them, they would be extinct.

China is the native home of both giant pandas and red pandas. This is a major similarity that these two creatures share.

This equally means that the two pandas in the world exist naturally only in the Asian continent.

However, these lesser pandas also live in parts of China such as Yunnan, and Tibet. Moreover, they live in other parts of Asia too, unlike giant pandas.

A giant panda’s attractive fur is black and white in color. Moreover, these two colors are separated into different parts of their bodies.

Red pandas’ fur is mostly reddish-brown in color and very attractive. Furthermore, the fur on their legs are black just like that of giant pandas.

It just seems like every species of panda must have a beautiful fur.

Another feature that makes the giant pandas and red pandas alike is the presence of an extra digit in their paws. This also seems to be another panda feature.

Interestingly, both giant pandas and red pandas’ false thumb is an elongated wrist-bone modified into a thumb-like digit. It’s different from other true digits but looks and acts like a thumb.

It’s believed that their wrist bones evolved to meet their bamboo-eating and climbing needs. These thumbs help both giant pandas and red pandas to handle bamboo well as they eat.

They equally help them climb trees. It gives them a good grip, especially when climbing high to parts of the tree where branches are thinner.

ALSO READ: DO RED PANDAS HAVE A FALSE THUMBS

Aside from eating bamboo, another thing both pandas are good at is climbing. This is one of the awesome similarities giant pandas and red pandas share.

Giant pandas, despite their round bodies, will shock you with the way they climb. They’re fast and can reach very high up trees.

These bigger pandas do not live on trees but often climb to sleep or play. Trees happen to be one of the giant pandas’ favorite sleeping spots.

Red pandas on their own are excellent climbers. It’s like a skill they’ve mastered, which is important for them as arboreal creatures.

Unlike giant pandas, red pandas live almost all their lives on trees and spend less time on the floor. This means most of their movements, including traveling, happen on trees.

These smaller pandas move on trees with so much confidence. Above all, both giant pandas and red pandas have no fear of heights whatsoever!

Giant pandas prefer to live alone naturally. Panda bears in the wild live far from each other, so they rarely socialize.

In addition, male pandas are territorial and would try as much as possible to avoid themselves. A red pandas’ case is also the same. By nature, they are also loners.

It’s rare to see more than one red panda staying in a particular tree. These creatures are highly territorial! A single red panda can have a large area of land to itself.

However, there are times these creatures stay together. And this is mostly during mating seasons.

During these times, giant pandas and red pandas look for their kind to mate with. Furthermore, both of these creatures sometimes travel in groups.

Giant pandas and red pandas are not extinct. However, they are both at risk of extinction in the wild. Both of them are very much protected around the world.

So giant pandas and red pandas are both victims of habitat loss, poaching and bamboo shortage. This has kept them in the endangered situation they are in today.

There are few of them left in the wild as their numbers keep reducing. In addition to this, they are both on the IUCN Red list of threatened species.

However, there’s a lot of activity and conservative efforts aimed at saving these two pandas from extinction. This is why you’ll find them living in zoos around the world.

To conclude, you’ve seen the similarities giant pandas and red pandas share despite their differences.

A major similarity is their love for bamboo, which also gave them their panda name. Giant pandas and red pandas equally share a native country, which is China.

Moreover, both pandas have very attractive furs. And on their paws, you’ll find an extra digit, which serves as a false thumb. It makes bamboo eating easier and also helps them when climbing.

All of these similarities discussed in these articles might make you wonder if these two belong to a particular family. Is there anything like a panda family?

Click here to know if the giant pandas and red pandas are relatives at all.