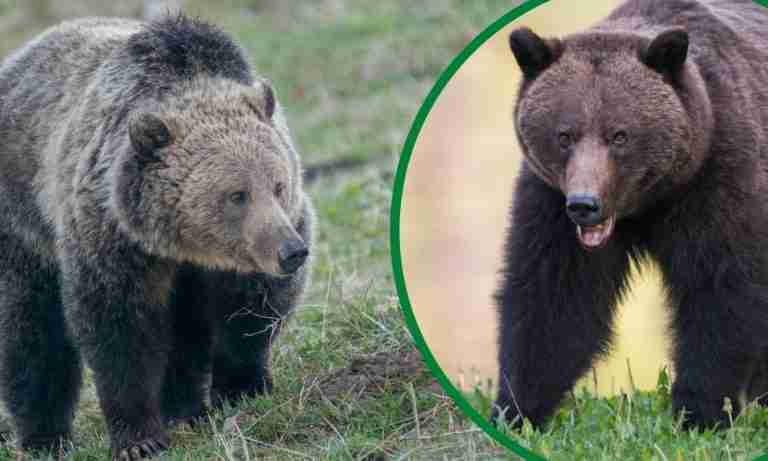 Many people think the grizzly bear is just another name for the brown bear. However, others still believe they’re different bears altogether.

But what’s the truth about this?

Here’s the answer – Grizzly bears are among the many subspecies of brown bears.

Grizzly bears refer to the inland brown bears with little access to food supplies from water bodies. On the other hand, brown bears normally live in the coastal parts of their habitats.

Being a subspecies means that grizzlies live in environments that separates them from other brown bears. As a result, they’ve developed slight changes in appearance and behavior.

All subspecies including grizzlies are of the same brown bear species (Ursus arctos). They can equally mate with other brown bears.

Now you know that grizzly bears are just the same as brown bears. But as subspecies, how are they different from other brown bears?

Keep reading below to find out!

3 Differences between a Grizzly Bear and a Brown Bear:

The size of a grizzly bear is greatly affected by its environment and diet. Grizzlies are smaller brown bears compared to their mates living in the coastal regions.

A grizzly bear has an average body length of 8 ft. Moreover, they can weigh up to 900 lbs. (400 kg). Nevertheless, brown bears, especially ones living in coastal regions, are much larger.

They can reach up to 10 ft. And they could be as heavy as 1500 lbs. (680 kg). Thanks to the availability of robust marine food in their regions.

No doubt, a brown bear with a more rich diet should definitely be bigger.

As mentioned earlier, grizzly bears are the subspecies living in a habitat that’s basically inland.

These inland parts are more of land, forest, and woods, with little or no water bodies. This makes their feeding and lifestyle a bit different.

Brown bears are any of the brown bear species living in coastal regions. In this kind of area, there are lots of fish, especially salmon to hunt and feed on.

All brown bears subspecies are omnivores but brown bears have a more rich diet than grizzlies. And this is due to their locations.

The fur color is one of the main differences between grizzlies and other bears. From their names, it’s obvious all brown bears have brown fur.

However, grizzly bears have unique brown fur. The color of a grizzly bear’s fur can range from light brown to dark brown.

But their fur always has silver tips regardless of the shade of brown. This means the tip of their fur is always silver.

And this gives these brown bears their grizzled look. It’s equally what brought about their names – Grizzly bears.

Brown bears, on the other hand, don’t have grizzled brown fur. They have a more standard brown fur. And it also comes in different shades – from light-brown fur to darker ones.

How to Tell a Grizzly Bear from a Brown Bear Easily?

You can tell a grizzly bear from a brown bear easily by its fur. A grizzly bear should have grizzled fur- brown with silver tips.

This fur color is a unique feature of grizzlies. This equally means that no other brown bear has fur like this. In addition, you can also look out for their facial profile.

Brown bears generally have a dish-shaped face, specifically at the front. It means the front of their faces curves inwards.

However, grizzlies tend to have a more dish-shaped face than other brown bears. It curves to the extent their snouts bend upwards.

Yes, grizzlies are more aggressive than other brown bears. And there’s a good reason for this. It has to do with their environment.

Not only does the inland environment affect their size but also their behaviors (more especially, their temperament).

Grizzlies, which are inland brown bears, do not have access to the rich marine foods as coastal brown bears do.

And there is a less abundant food supply in the inland region. As a result, a grizzly bear will be more territorial and need to have a large home range to itself.

Furthermore, there will be lots of competition. All of this combined makes them more aggressive than any other brown bears.

They’re aggressive to themselves and also to humans. As a matter of fact, grizzlies and polar bears are the two most dangerous bears in the world.

What are Other Subspecies of a Brown Bear?

Now we understand that all grizzlies are brown bears. However, you should know that not all brown bears are grizzlies.

There are many other subspecies of brown bears other than grizzlies. See them below:

Its fur color can range from yellowish brown to a very dark brown (almost black). This brown bear also has an average weight of about 660 lbs (300 kg).

These brown bears are found in the Islands of the Archipelago (Southwest of Alaska).

They are large enough that they, alongside polar bears, are the largest type of bears in the world. Their fur can be blonde, orange-brown, or dark brown. These bears can reach about 1,500 lbs (680 kg).

Syrian brown bear (Ursus arctos syriacus) is a smaller brown bear subspecies and weighs 550 lbs (250 kg) on average. In addition, they naturally live in the middle east and the Caucasus mountain range.

Their fur is very light brown in color, but darker around their legs. Interestingly, they’re the only bears that have white claws.

Ussuri brown bear (Ursus arctos lasiotus) or the Ezo brown bears are one of the largest and most common brown bears. Their size almost matches that of the Kodiak brown bears.

In addition, these bears look like the Kamchatka brown bear but have darker fur.

East Siberian brown bear (Ursus arctos collaris) is another subspecies of brown bears. They range from different regions in East Siberia. They’re known to be hunting types of bears.

These brown bears have long, thick, and soft fur. And their fur color is quite similar to that of the Eurasian brown bears.

Kamchatka brown bear (Ursus arctos beringianus) is the largest brown bear in Eurasia. They can reach up to 10 ft and weigh 1430 lbs. (650 kg) on average (almost the size of Kodiak bears).

Furthermore, these brown bears live on the Kamchatka Peninsula and some other islands in the eastern part of Siberia.

Sitka brown bear (Ursus arctos sitkensis), aka “ABC Island bear”, is one of the brown bear subspecies living in southeast Alaska. They have a common fur color that’s somewhat milky-brown.

In addition, these brown bears are solitary type. But they can associate with other bears, especially when they’re in an area with lots of food.

Gobi bear (Ursus arctos gobiensis) is a subspecies of brown bear that lives in the Gobi desert of Mongolia. They’re equally very small brown bears with an average weight of about 300 lbs. (140 kg).

It’s amazing how they’re the only bears that have gotten used to living in such a hot and harsh desert climate. However, only a few of these subspecies are left and males are even more than females.

Himalayan brown bear (Ursus arctos isabellinus) or the Himalayan red bear is the largest mammal in the Himalayas where they naturally live.

This habitat is normally in the mountainous regions of Pakistan, Nepal, Tibet, and India. Moreover, the Himalayan brown bear has a unique reddish-brown or sandy fur.

Alaska Peninsula brown bear (Ursus arctos gyas) is another very large subspecies of brown bears. These bears can be as heavy as 1200 lbs (540kg).

In addition, they live in the coastal regions of Southern Alaska where there are lots of Salmon for them to feed on. Their fur ranges from a blonde color to almost black.

Grizzlies are subspecies living in inland regions of North America. An environment that’s different from the other brown bears that live in coastal areas.

The environment they live in affects their size, diet, and behavior. All brown bears might look the same, but a grizzly bear’s fur is a bit different.

If you spot a brown bear with silver tips at the end of its fur, then it’s certainly a grizzly bear.

Grizzly bears can be pretty aggressive and can pick a fight with other bears in the wild. But what if they happen to meet a panda bear?

What will be the outcome of a battle between pandas and grizzlies? Click here to find out who’s likely to win.