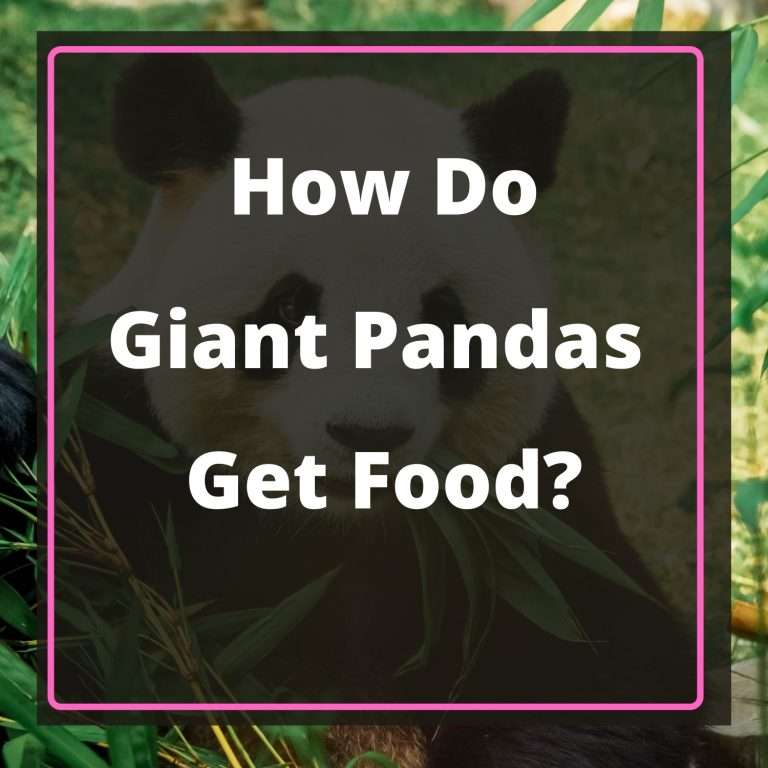 Pandas are very clumsy and shy creatures. If there’s one thing they’re very picky about, it’s their diet. Interestingly, they prefer not to eat what they can digest, and this makes me wonder, how do giant pandas get their food?

Giant pandas get their food from the bamboo forest around them. Panda’s way of hunting for food is walking up slowly to where there are many bamboos. With their hands, they grab the main stems, break them down and feed on them.

The most common types of bamboo they eat are the water bamboo, black bamboo, and the arrow bamboo. You’ll find them alone doing it several times a day. They love it this way as they don’t need to compete for it.

Now you know pandas mainly get their food by walking up to bamboo around them, you might wonder also, how do giant pandas eat their food? Do they eat up the whole thing?

How Do Giant Pandas Eat their Food?

Unlike most large animals who eat mainly with their mouth, giant pandas’ unique wrist bones and five fingers always come in handy when eating. With their hands, they grab, break and hold bamboo while they eat.

You’ll find them mostly on the forest floor sitting lazily and tearing up bamboo, shoots, leaves, and stalks.

An exciting thing about pandas is their strong desire for bamboo that can’t be satisfied. Moreover, they don’t just eat it for long but are also fast at eating. Eating, specifically bamboo, takes about half of their day or more.

Scientists wonder how pandas live by eating bamboo that’s just full of fiber and low in nutrients. Meat would have met more of their nutritional requirements but these cute bears don’t care.

What Do Giant Pandas Eat Besides Bamboo?

In a whole day, these cute creatures can eat almost nothing besides bamboo. With bamboo taking up to 99% of their diet, these creatures won’t care much about any other food. However, pandas can also eat the following:

However, you can see them eating fruits such as apples, mangoes, berries, etc. Getting fruits, especially from trees isn’t a problem for this bear as they climb pretty well.

Giant pandas can sometimes eat man-made foods. This more common with pandas living in captivity who go ahead eating chocolates, cakes and delicious puddings. This is why these creatures are thought to be herbivores, carnivores, and at the same time, omnivores.

Also, on rare occasions, you’ll find them eating other smaller animals such as mice, pikas, fish, etc. Of course, you don’t expect them to eat animals larger than them like most carnivores do.

Moreover, having the sharp teeth and digestive system of a carnivore, why did giant pandas stop eating meat?

Let’s discuss this next!

They didn’t stop eating meat completely, but they stopped eating mostly it. Interestingly, giant pandas in the past normally ate meat. But there were a lot of adaptations that changed this and made these cute bears lovers of bamboo.

They preferred eating their bamboos and stayed away from the food that’s common with most carnivores. They’re peaceful creatures and won’t at all want to engage in any food fight.

In their habitat, bamboo is all around them and that’s just what these lazy bears need other than searching, hunting, and fighting for meat. This behavior contributed to their love for their bamboo diet.

Some scientists researched and found out that it was caused by a certain gene complication, a mutation that changed their taste for meat to date. So, they don’t see meat as a tasty food again.

Pandas normally had an “umami taste receptor” in their genes which did not reflect again. This umami taste receptor was responsible for detecting and tasting meaty flavor. Pandas did not have it anymore and their desire for meat faded gradually.

To sum up, giant pandas get their food around the habitat they stay in. They eat mostly bamboos as if they were naturally herbivores. However, like humans, they make use of their hands to grab and eat food.

There are about 42 species of bamboo available which a panda can eat. So, pandas eating mainly bamboo doesn’t mean it’s only one type.

Hopefully, you now know how these creatures lost their appetite for meat and became the ‘bamboo bear’. Any other food, including meat, aside from bamboo takes on about 1% of their diet.