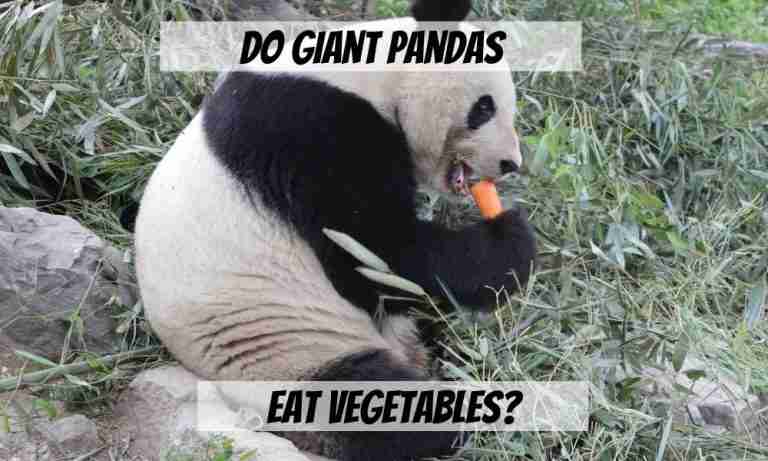 We’ve all seen a giant panda eating bamboo. But what can pandas eat besides bamboo? I often find myself thinking, “do giant pandas eat vegetables?” and if they do, which vegetables precisely.

This article is going to be the favorite thing on the internet today for all the panda lovers out there.

This will cover everything as to why and how they switched to eating vegetables and became vegan (which is actually a cute thing).

Let’s get into the details and find out it happened!

Simply put, giant pandas can eat vegetables. However, their metabolic system is well equipped to digest meat as well.

Essentially, they need meat to fulfill their nutritional requirements. Therefore, scientists have found that the cute panda bear is miserly poor in its energy reserves.

Pandas, whose ancestors were actually carnivorous, are now relying on a completely vegetarian diet. Thanks to the low physical activity that they are surviving on the plant diet as well.

Since their bodies are well-set to digest meat, they do not quite easily metabolize and digest the bamboo leaves and shoots.

Now when bamboo makes up to 99 percent of their total food consumption, some of it essentially devours while the other being digested for their survival.

You must be wondering, how do they even survive with this less amount of energy that their bodies are able to extract out of the plant-based diet.

Well, the answer lies in the fact that they have super low levels of thyroid hormones. Hence, they can live on with the small energy that they have.

So, now you know why do giant pandas eat vegetables and not meat. Makes sense, right?

The researchers widely studied wild pandas in China and found that they only expended 38% of energy as compared to the other animals of similar size.

This often relates to a mutation in a particular gene that accounts for the correct synthesis and working of thyroid hormone. Thyroid glands, with the help of their hormones, control energy use, and other metabolic processes.

Thus, when the pandas could not get the diet that they were actually made for – that is the meat. They made certain adaptations in their body – be it morphological, physiological, behavioral, and genetic.

They reduced their organ sizes, limited their physical activity, and lived a rather sedentary lifestyle to support living.

What kind of vegetables do giant pandas eat?

Now when we know the answer to it: do giant pandas eat vegetables? The next question that pops up in mind that which vegetables do they actually eat?

Many people love to keep pandas as pets, and so they are pretty much interested in their dietary requirements.

In vegetables, they would happily eat the following vegetables:

Since the panda bodies are equipped with heavy food – like eat, they usually have to eat lots of veggies to fulfill their requirements.

Apart from this, you will be amazed to find out that they eat some fruits – such as apples and vines as well.

However, it must be kept in mind that even if the giant pandas eat vegetables, fruits, and whatsoever else we give them, they would only take 1% energy from them.

The rest of the 99% of their nutritional requirements are only met by the bamboo and its trees and shoots. Therefore they eat around 26 to 84 pounds of bamboo every day!

Apparently, we can say that pandas probably depend on the appearance of food in deciding what they will eat. The giant pandas love to eat everything that looks green or looks like a vegetable.

Why are pandas vegetarian?

It was quite baffling to see a carnivorous animal switching its diet entirely to plants – or vegetables.

Although the panda ancestors were carnivores and they entirely needed meat to live. However, they belong to the bear family, who are omnivores – that means they eat both meat and vegetables.

So, when they did not find enough meat due to the competition with fierce animals like tigers and lions, they instead shifted to a portion of simple food.

Since they are generally not such wild animals, therefore, maybe they preferred to stay out of the competition.

However, they are still carnivores with their strong canine teeth and a protein metabolic system.

The studies suggest that the giant pandas stopped to prey for meat food some 7 million years ago. And since then, they are becoming more and more inclined towards vegetable food.

Apart from that, the genome sequence of the giant panda showed that the taste receptor gene Tas1r1 had some changes that lead to a loss of perception of the meat food.

Hence, they started finding bamboo and other green vegetables more appealing – giving them a herbivorous identity for the most part.

I believe, the fact that they had changes in the taste receptors genes is the perfectly valid answer for do giant pandas eat vegetables!

According to the researches, the giant pandas had become the proper bamboo eaters or vegetarians a good 2 million years ago. Hence, this evolution has been with us for a long, long time.

At present, yes! Now, after millions of years of giant pandas eating herbs, vegetables, and bamboo, we can officially say that they are vegan, and we find the right answer to the frequently asked question that do giant pandas eat vegetables.

However, they might still hunt for small animals such as rodents once in a while.

Amazingly, they can digest these small animals and, in fact, other meat substances as well, because originally their body is able to digest meat far better than the vegetables themselves.

They have adopted a strategy for better survival by restricting some of their activities that could consume a lot of energy. Hence, they are now perfectly herbivorous while having a carnivorous digestive system.

Coming to what’s important – giant pandas are actually vegetarian, and they would love to eat green leafy things.

However, they’d still rely on bamboo that they have to take in really large quantities to fulfill their nutritional requirement. This is because only a small amount of bamboo gives them energy; the rest is not even digested in the first place.

It’s similar to thinking about carrots as it was to think that do giant pandas eat vegetables. So to answer that, giant pandas do eat carrots.

Since now they have evolved themselves as vegetarian, they eat many vegetables and fruit such as sugarcane, rice, gruel, apples, sweet potatoes, and high fiber foods.

However, since their metabolism is carnivorous, they mostly stay energy-deprived by taking veggies.

To make up for the nutritional requirements and the inefficient plant or vegetable digestion, a giant panda mostly relies on consuming a larger amount of food – such as 20 to 60 pounds every day!

Despite this large amount, they still live by restricting most of their physical movements as well as high energy-requiring activities. It’s probably one of the most rare – yet inspiring adaptations in such cute fluffy pandas.

It’s very unlikely that the pandas eat pineapple. It’s probably because they get enough carbohydrates or sugars from the bamboo itself.

Hence, there is no particular requirement for them to eat pineapples too.

Moreover, according to studies, it is suggestive that they mostly rely on things that appear like bamboo or vegetables to them – that’s basically the green vegetables and leaves.

Although the pandas that are captive or are in zoos are often showed eating certain fruits such as apples, they do not really extract out much energy from them.

For most of their energy extraction (almost 99%), they rely on the bamboo, which they take in sufficiently large amounts. Other than that, whatever they eat, it would only make up 1% of their diet.

So, you pretty much know that do giant pandas eat vegetables.

It’s rather very rare that we see a panda attacking some other animal or human. However, it’s still possible. After all, they have adapted themselves to be vegetarian or herbivorous.

In reality, their inner self is still carnivorous, and maybe at some point, to take up some proteins, they hunt on small animals like rodents and rats.

We came across certain very dynamic adaptations that have made pandas herbivorous.

Firstly, it was the taste receptors that made them like plants and vegetables more as compared to meat and flesh.

Secondly, their organ size got smaller to survive in the small amount of energy that they are able to extract from the bamboo.

Thirdly, their thyroid gland started producing less thyroid hormone to expend energy at a rather slower rate than usual.

And lastly, they limit their physical movements and activities. At most, we will see them cuddling around and walking slowly and steadily.

Like you’d never see a panda running or fighting or even jumping very high!

If you get a chance to see a cute panda rolling over, it would be quite a sight to get them straight on their cute feet again.

If you find this article helpful, share it on your social media!