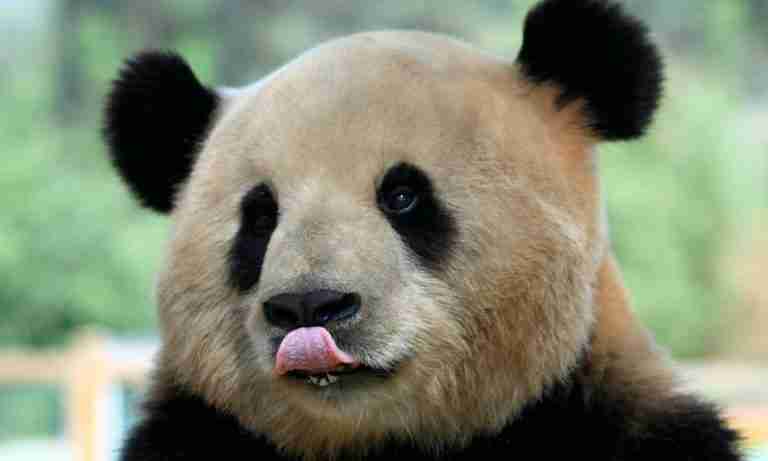 From the way they walk, climb trees, and eat bamboo, pandas have always been fun to watch. It’s no wonder people from different parts of the world find these fuzzy creatures amusing.

What’s so funny about the pandas? You’ll probably want to know.

Keep on reading as we list out 13 funny panda facts!

1. A Group Of Pandas Is Called An “Embarrassment”

While a group of pandas can be called “a bamboo of pandas”, they are also called “an embarrassment”.

Are the pandas embarrassing creatures? Do they have a habit that makes people laugh at them?

No one knows for sure how they got this comical name. But you’ll agree with me that it’s a funny name to call a group of cute animals.

It is fair to say the pandas have a lazy lifestyle, considering how they spend their days. If they are not eating a truckload of bamboo, then they are sleeping or resting.

Despite having low nutrients, bamboo is the pandas’ favorite. Usually, these fuzzy creatures spend between 10 to 16 hours eating and looking for more food every day.

And when they are fully satisfied, the pandas find a comfortable place to sleep. Although the sleeping habits of pandas in captivity and in the wild differ.

In captivity, the zookeepers engage the animals in different activities that keep them active during the day.  Regardless, these cute creatures can spend 10 hours sleeping every day.

Read Also: What Do Pandas Eat?

Here’s one thing you need to know about the giant pandas – they poop a lot.

By nature, the pandas have the digestive system of carnivores. As a result, they do not have the bacteria that digest plant materials. Interestingly, they only digest about 17% of close to 30 pounds of bamboo they eat every day.

This means most of the bamboo the pandas eat is released as waste. And this is one main reason they poop at intervals.

Sometimes, a panda may be sleeping and pooping at the same time; it’s normal in their world.

Another funny fact you need to know about the pandas is that they roll in horse poop. Sounds disgusting, right? Of course!

But there’s a reason behind it.

According to research, the giant pandas roll in horse poop just to keep warm during winter. Researchers found out that there’s a chemical in horse droppings that protects the pandas from cold.

Rolling around the poop of other animals is a strange habit in the animal kingdom. So, we can conclude that the giant pandas are unique in their ways.

Seeing a panda peeing upside down will surely make you laugh out loud. Not only is it a strange habit, but it is also amusing.

Researchers found out that a male panda does a handstand while urinating to spread its scents. It is a way of marking his territory thereby increasing the chances of mating.

Understand that mating in pandas can be compared to “survival of the fittest”. One, they have a brief mating period and two, the females are picky about the males during this period.

Therefore, the males need to work hard to attract the females and also send competitors far away.

6. Giant Pandas Are So Clumsy

Observe the giant pandas for some minutes, and you’ll notice they are clumsy. Naturally, these cute bears fall repeatedly, which is one of the ways they have fun.

Although baby pandas fall as their bones develop; this is completely normal. Perhaps the adult panda bears fall because of their round body shapes and short limbs.

Still, it is fair to say the panda bears do not carry themselves with grace when walking.

Considering a large amount of bamboo they eat daily, it’s not surprising that the giant pandas fart a lot.

Pandas have the digestive system of carnivores – meat eaters but feed like herbivores – plant-eaters. Understandably, the digestion of food will be different because the pandas lack the gut bacteria that break down plants.

As a result, they tend to eat a lot, fart many times a day, and poop continuously, even when sleeping.

Read Our Full Guide On Do Giant Pandas Fart A Lot?

Interestingly, pandas have six fingers on both paws, including an opposable “thumb”.

Similar to an extended wrist bone, the thumb allows these pandas to hold and peel bamboo easily. It also allows them to have a firm grip on trees while climbing up and coming down.

Most animals are known to enjoy one another’s company, but that’s not the case with pandas.

A giant panda prefers to be alone, munching on bamboo or sleeping on a tree. Except during the mating season, you will hardly see a male and female panda playing together.

10. Mother Panda Abandons A Cub If She Has Twins

If a mother panda gives birth to two babies at a time, only one will survive. Sounds strange, right?

Understand that taking care of her cub can be stressful for the female giant panda. Since the cubs are blind and helpless at birth, the mother panda has to tend to all the cubs’ needs.

In captivity, the zoo keepers look after the cub that has been abandoned by the mother panda.

Surprisingly, panda cubs usually have pink furs at birth. So, if you see a baby panda for the first time, you may think they’re a different species of panda.

In fact, the white and black fur doesn’t appear on a panda cub’s body fully until after 3 weeks.

Recommended Reading: What Does a Newborn Panda Look Like?

One other strange and funny fact about pandas is their cubs’ size. Panda babies weigh about 3.5 ounces (100grams) at birth, which is about 1/900 of their mother’s size.

We can compare the size of the panda cubs to a stick of butter; very tiny.

Perhaps the panda bears’ bamboo diet, which has little nutrients, influenced the size of their babies.

Also Read: Why are Giant Pandas Born So Tiny?

13. Pandas Are Not Good As Pets

After seeing a panda for the first time, you may be considering keeping one as a pet. Unfortunately, giant pandas do not make good pets like dogs and cats.

Not only do they eat lots of bamboos every day, but they also poop a lot. These panda bears do not like any form of disturbance and they are also not for sale.

Keep in mind that all pandas belong to the Chinese government and they only loan the animals to zoos.

So, it is better to keep admiring the pandas from afar than to take one of them home.

Now, we are sure you understand why people derive pleasure from watching the giant pandas in their habitats. Although they look cute, the panda bears have a lot of funny habits that crack people up.

Do you want to learn more facts about the giant pandas? Check out this article 29 most adorable giant panda fun facts