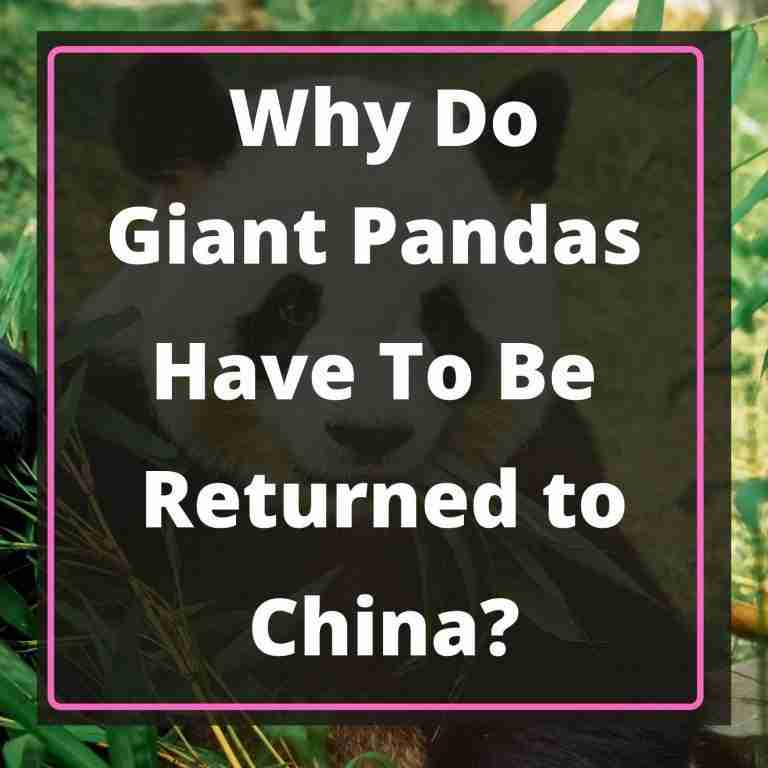 Giant pandas only live in China. That’s their natural home! However, some zoos around the world have been able to get some from China.

But in some cases, these creatures are sent back to China after many years of living in a particular zoo.

I just wonder – why do giant pandas have to be returned to China?

Giant pandas are subject to loan agreements in zoos outside China. Moreover, in situations where zoos can’t renew the loan contract, they have to be returned to China.

Some zoos in some countries can run short of fresh bamboo, which is the main food of the giant panda. This is a big challenge and can affect the pandas’ well-being so returning them to China is the safest option.

China’s panda diplomacy has been the only means countries have had pandas in their zoos. These pandas are only given as loans and are always sent back whenever the zoos can no longer handle them.

If they are only given as loans, how much does a country pay China for pandas?

Let’s discuss this next!

How Much Do We Pay China for Pandas?

It is a million dollars every year for a giant panda! This is the loan fee every zoo outside China pays to have a giant panda.

However, you can’t buy a giant panda. This is only a loan fee as China doesn’t sell its giant pandas.

In addition, if cubs are born during the loan period, the zoo has to pay an extra $400,000 every year for each cub. You should also know that all of these loan fees go into the preservation of these cute bears.

Interestingly, many countries want to have pandas in their zoos but believe me, they’re very expensive to keep.

Recommended Reading: How Much Do Giant Pandas Cost?

The major issue countries have in keeping pandas is the loan fee and the cost of caring for one. These are two different things to consider and both are too much for some countries to handle.

So much care goes into keeping these creatures so it’s not just about paying the loan fee. This is why there are no giant pandas in India and some other developing countries.

However, many Asian countries such as Singapore, Malaysia, Japan, etc. have been able to keep and manage these creatures in their zoos.

In addition, countries outside Asia like France, Spain, the US, etc. also keep giant pandas in their zoos. Most of these zoos have panda cubs, which add an extra $ 400,000 per cub to their yearly loan fee.

Do We Need to Return Baby Pandas to China?

Yes! Baby pandas are always sent back to China when they’re mature enough. Returning every cub born during the loan is part of the loan agreement.

Zoos don’t own any cubs that are born. As long as they were born during the loan, they’re still properties of China. This is the reason baby pandas have to be returned to China.

However, these cubs stay in zoos until they become independent before they are sent to China.

Does The US Own Any Pandas?

No! The US doesn’t own any giant pandas. These creatures are only in US zoos under loan agreements and still remain the property of China.

Way back in time, China gifted pandas to some countries as diplomatic tools to build good relationships. However, it didn’t last and those countries were not able to handle them.

Presently, China now gives giant pandas to other countries on loan. This is the only way any country could have these cute bears. But still, they can’t own them.

So, every panda you see in the US zoos directly belongs to China. Even the pandas at popular US zoos like the Smithsonian National Zoo, Zoo Atlanta, San Diego Zoo, etc. are all loans from China.

The yearly loan fee the US pays to the Chinese government doesn’t make these giant pandas US properties. Nevertheless, that’s just a loan agreement to keep pandas and not to own them.

In summary, giant pandas have to be returned to China when countries find it hard to manage them. It could be a financial situation where these zoos can’t keep up with the loan fee again.

It could be the run short of the resources to care for these creatures. This alongside being unable to renew the loan agreements are reasons why some giant pandas have to return to China.

In most cases, baby pandas are sent back to China when they are old enough to be on their own. This is part of the loan agreement aside from the yearly one million dollar fee.

Every giant panda you’ll see outside China is on loan. This lending of pandas is a practice known as “panda diplomacy”.

Despite countries don’t completely buy these creatures from China, keeping them is still pretty expensive. Moreover, things get even more expensive when you even have cubs in your zoo.

If you want to know more about where giant pandas live, you can read this article—Where Do Giant Pandas Live?—for a full guide!