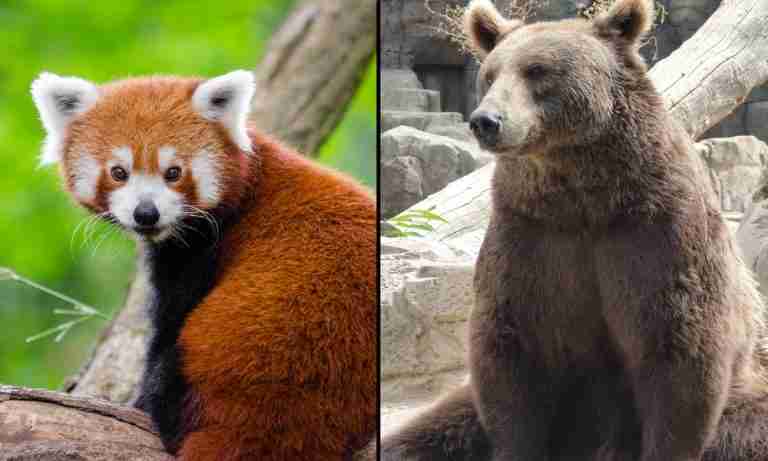 If you think about it, red pandas appear to be small bear-like animals.

Additionally, after some DNA analysis, red pandas were once linked to the bear family. But is it true that they are related to bears?

No, red pandas are not related to bears. These two creatures belong to separate families of mammals. Red pandas belong to the Ailuridae family. On the other hand, the bear family is Ursidae.

Interestingly, the only pandas related to bears are the giant pandas. And they belong to the same Ursidae family as bears.

If you want to learn more, continue reading below!

Why are Red Pandas Not Related to Bears?

Now let’s see some of these differences between red pandas and bears:

Red pandas and bears aren’t in the same family. And this is one of the main reasons why these two creatures are not related.

These red pandas belong to the family of Ailuridae. What’s more, they are the only members of this mammalian family.

On the other hand, bears belong to the family Ursidae. And this bear family includes polar bears, grizzlies, giant pandas, sloth bears, and more.

See the classification of red pandas and bears below:

A red panda’s appearance is almost similar to that of a domestic cat. These creatures are known to have beautiful furs that are colorful.

In addition, these creatures have bushy-ringed tails that are pretty long.

On the other hand, bears come in almost even fur colors with no patterns (except giant pandas).

And only giant pandas are an exception to this. They are the only bears with patterns and unique coat colors.

They can appear white, brown, black, and many more shades depending on the species. In addition, bears aren’t tailless as some might think.

They have tails, including giant pandas. However, their tails are way different from that of red pandas. This is something you can hardly notice.

Additionally, “muscular” is the right word to use in describing bears. As large land predators, they appear heavily built.

However, red pandas aren’t packed with muscles like bears. They have round, flexible bodies.

This range starts from the smallest bears, sun bears to larger bears like polar bears.

Red pandas are primarily herbivores. This is because they survive mainly on plants, particularly their favorite bamboo.

Both in the wild and in captivity, red pandas need bamboo to survive. This feeding habit makes them look like vegetarians.

But they aren’t vegetarians as they also eat meat on rare occasions. On the other hand, bears aren’t bamboo eaters except for the giant panda.

Interestingly, bears are omnivores. This means they can survive on either plants or meat.

None is more important in their diet, unlike red pandas and their bamboo. Interestingly, giant pandas are the only bears that share a similar diet to red pandas.

A common thing about red pandas is that they are rare creatures. They don’t live naturally in any other continent except Asia.

Moreover, their habitat in Asia, especially the Himalayas, is unique. This is because of the climate and dense bamboo forests that suit the red pandas’ needs.

Bears, on the other hand, live naturally in many parts of the world. They are native to North America, South America, Europe, and Asia.

However, the giant panda is the only bear that’s native to Asia alone like the red panda. And that’s one similarity red pandas and giant pandas share.

Red pandas are arboreal animals instead. They spend more time on trees throughout their lives. And not just any tree in any habitat.

They live in trees close to food sources, particularly bamboo. Additionally, red pandas can do almost all their activities while on trees, unlike bears.

Red pandas can eat and even travel through trees. This kind of movement on trees is called arboreal locomotion.

In contrast, bears are more of the large terrestrial creature. They live entirely on land. While on land, bears, depending on the species, can live either inland or in coastal areas.

What are Red Pandas Most Related To?

Red pandas are more closely related to raccoons than they are to any species of bear.

In addition, a scientific study supported the fact that red pandas share many physical characteristics with raccoons. And this includes

What are Bears Most Related To?

Bears (all species) are closely related to seals (Pinnipeds). These creatures are large semi-aquatic animals that share many similarities with bears.

This includes their long snouts and large bodies. In addition, some studies made years back revealed that bears and seals had a common Canivoran ancestor, about 50 million years ago.

And this study was based on the evolution of the Canivoran order of mammals. Furthermore, seals come in three main groups, which are all closely related to bears. They include:

We’ve seen the differences between red pandas and bears. Now let’s look at the things they both have in common.

To sum up, red pandas and bears are not related.

Certainly, I’ve helped you understand this with the few differences between them. Here are a few things to remember:

From this article, you must have noticed that giant pandas share more similarities with red pandas than any other species of bears.

So you might want to check out these 8 Striking Similarities Between Giant Pandas and Red Pandas!