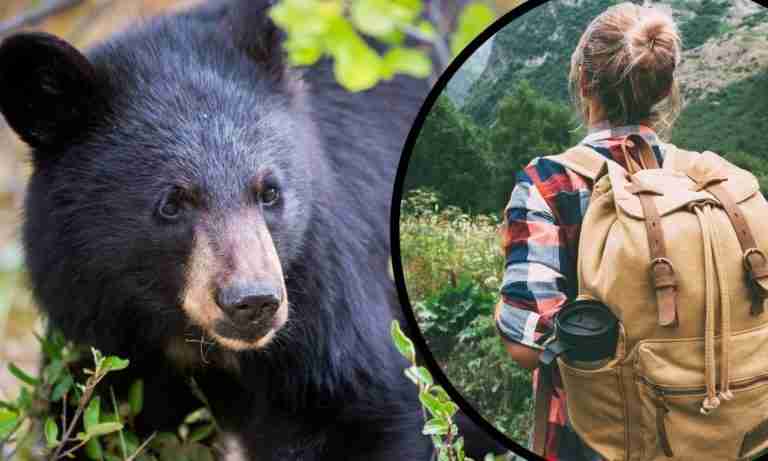 Even when you look at the black bears from a distance, you’ll notice they are big animals. Moreover, they have sharp claws and big teeth that can tear prey apart quickly.

Considering their physical features, are black bears scared of humans?

Surprisingly, black bears are scared of humans more than we are of them.

One reason why black bears fear humans is that we look like other bears while standing. And so, these large animals, especially the young ones and females, see humans as a threat.

Moreover, it’s in the nature of animals to be suspicious of humans. It’s within their instinct that helps them to protect themselves.

Now that you learned about this, let’s look at 10 more reasons why black bears are scared of humans.

10 Reasons Why Black Bears Are Scared of Humans

While there can be many reasons why black bears fear humans, I will be discussing 10 of them.

1. Black Bears Are Not Domestic Animals

As with the other bears, black bears are wild animals. They spend most of their lives in the wild and may not come into contact with humans at all.

Usually, animals that do not live around humans tend to feel fearful when they meet them. Since they don’t see people often, these bears assume they are a threat to them.

Domestic animals like dogs and cats hardly fear humans. This is because they have spent more time with humans and therefore trust them.

Most of the time, animals in captivity feel safer with humans than those in the wild.

All animals, including black bears, have a survival instinct. A part of this instinct involves being afraid of humans in their environment.

As a result, these animals live longer because they’re always more watchful. They also tend to be suspicious of people in their immediate surroundings.

It’s no wonder why a black bear will attack someone who has been feeding him for years. These large animals do not live by emotions; they live by instinct.

It’s in the bears’ nature to defend themselves or run away whenever they sense danger.

3. They’ve Had Bad Experiences With Humans

Generally, animals that have suffered attacks from humans will likely be more fearful. In a case where humans harm some black bears in their territory, the others will be more cautious.

When these large bears next see a human, they’ll probably run into hiding to remain safe.

In addition to being solitary animals, black bears are naturally shy. They hardly launch an attack except if it is important for their survival.

Interestingly enough, grizzlies are 20 times more dangerous than American bears. In a situation where black bears face danger, they prefer to climb a tree rather than attack.

Normally, black bears live a quiet life, except they feel the need to defend themselves.

5. They Think Humans Are Other Bears

Since humans appear taller when standing, the black bears assume we are other bears. Animals that stand on their hind legs, including gorillas, do so to appear more powerful.

Most of the time, smaller bears and females feel fearful when they sense the presence of another bear. So, when a black bear sees a person standing, it’ll think it’s another bear and may run away.

Over the years, people have studied bears and learned what makes them afraid. As a result, they now use scare tactics to make the black bears afraid, especially in the wild.

Some of these tactics include:

To an extent, these methods have been effective in keeping the bears in their place.  While these large animals don’t attack without a cause, it is best to be alert every time.

Another reason black bears are scared of humans is that they see us as social predators. In other words, they assume that people can team up to prey on them.

Due to their solitary nature, black bears are always alone.

On the other hand, humans are always in groups, whether on camping trips or hiking in the wild. So it makes sense for a black bear that’s alone to be afraid of 10 adults camping in its habitat.

8. They Are Scared Of Human Sounds

Humans make noises in a variety of ways, from group discussions to car horns and loud music. As we’ve mentioned earlier, black bears are calm and timid animals.

Moreover, they are not used to being around people, not to mention loud noises. So sudden loud noises will possibly make these bears feel afraid.

Remember that these animals have to be alert at all times. In the wild, they have to keep looking out for threats as a way to prevent sudden attacks.

Understandably, a bear will run into a safe place if it suddenly hears a sound from a loudspeaker or a horn from a large truck.

9. Humans Have Once Taken Over Their Habitat

As the human population is increasing, so is the need to build more houses and construct more roads.

Unfortunately, the bears’ territory was not left out of building developments and road construction.

Apart from the loss of habitat, the black bears may suffer from starvation due to their destruction of food sources.

Therefore, when these large bears see people, they assume they want to destroy their habitat again. This is possibly the reason they feel fear when they see us.

10. Black Bears Are Careful Of Hunters

Even today, some people still go into the wild to hunt down bears. And unlike in the past, when they used sharp sticks, these people now use powerful rifles and bows.

In addition to making a lot of noise, gunshots that hit unlucky bears can scare others.

So, whenever these animals sense the presence of people in their habitat, they’ll keep their distance.

What Are The Signs Of A Scared Black Bear?

A scared black bear will usually climb a tree if it detects a threat. It’s one of the ways to show submission. If it’s a mother black bear, she’ll tree her cubs to keep them safe.

Other times, a scared black bear may lunge towards the threat and smack the ground in the environment. It’s just a sign that the black bear is afraid but doesn’t want to leave for some reason.

Another sign you’ll notice in fearful black bears is vocalization. Usually, the bears will expel air in different patterns associated with some body language.

They may also huff and clack their teeth to express apprehension or nervousness.

Usually, these American bears retreat after expressing signs of fearfulness.

What Do I Do If I Encounter a Scared Black Bear?

In case where you see a black bear in your region, don’t panic. Know that these animals are shy, so there’s no cause for concern.

Under normal circumstances, a black bear would not attack you. But if you’re not comfortable with its presence, follow these tips:

Apart from being timid animals, black bears are also less aggressive. In addition, they are not territorial towards people.

In a rare situation where a black bear attacks a person, it is probably a mother bear trying to keep her cubs safe from danger. Mother bears are always overprotective of their cubs. As a result, it will attack humans and other animals that are seen as threats.

Also, black bears may attack humans as a form of self-defense, especially if there’s an invasion of their habitat.

So, under natural conditions, a black bear would not attack humans.

Regardless of their big stature, strong jaws, sharp teeth, and claws, black bears are scared of humans. We are sure you now know why these large animals fear people.

Nevertheless, you need to be careful around these American bears. While they will probably run away when they come into contact with people, they’re not predictable.

Be vigilant and prepared whenever you plan to go hiking or on camping trips close to the black bears’ habitat. It’s better to be safe than sorry!