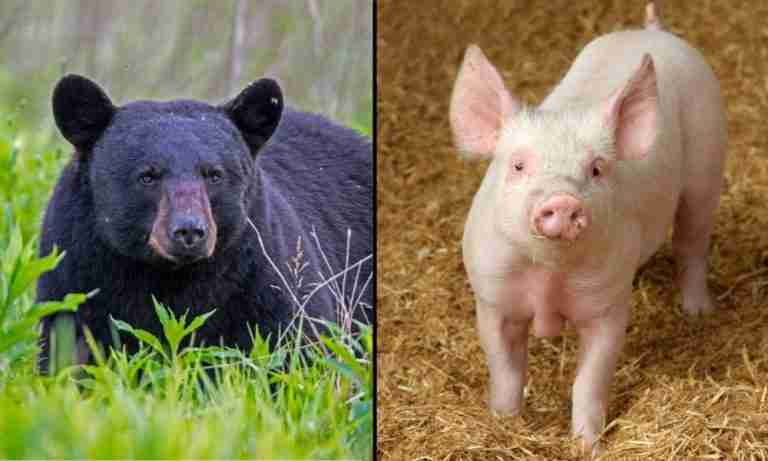 Owing to a few physical and behavioral similarities, many assume that bears and pigs belong to the same family.

However, here’s what you need to know.

Bears and pigs do not belong to the same family. They are not related to each other at all. A bear is a member of the Ursidae family, which consists of different species of bears and the giant panda.

On the other hand, pigs belong to the Suidae family. It has members that include different species of domestic pigs, wild pigs, and hogs.

Bears & pigs are different in a lot of ways. To give you more idea, let’s discuss their differences in detail!

Bears are in many ways different from pigs. Anyone will agree to this after looking at the differences between the two creatures.

Let’s look at the differences in detail below:

Bears belong to the Ursidae family of mammals. And in this family, some of the members include polar bears, brown bears, black bears, giant pandas, etc.

Pigs are not part of the bear family. They are members of the mammalian family known as  Suidae.

Additionally, a major feature of every member of this family have long, sensitive snouts that work like whiskers. Pigs are equally hoofed animals and do not have paws with claws as all bear species do.

Bears are normally larger than pigs. However, sun bears are an exception. They are the smallest species of bears and most pigs are larger than they are.

Bears and pigs don’t sound alike. There are many sounds bears make. This is because of the many species of bears.

A bear species might have unique noises that another species does not make. Some common sounds bear make include growling, moaning, tongue-clicking, and roaring.

Pigs mainly oink but will make other sounds like grunting and squeaking. Bears and pigs are different animals as they don’t even sound similar.

A common thing with all bears is their large and heavily built bodies. They are very muscular animals!

In addition, bears have round heads and this applies to all species. A pig’s body shape is way different. If I say they are muscular, then they are no longer the pigs we know.

This is because these creatures are well known to have round and stout bodies like the shape of a jellybean. Moreover, they have very short legs compared to their body size.

And when it comes to their heads, they don’t have round faces as bears do. Their heads take the shape of jugs instead.

Pigs are very social animals compared to bears. For this reason, they make good pets and bond well with humans.

Pigs normally live in small groups known as sounders. Bears, on the other hand, are naturally solitary creatures.

They live alone but are not territorial. The bears have home ranges instead. So long as there are lots of foods available in the area, they can tolerate each other.

It’s mostly during mating times or when a mother is with her cub(s) that you can see bears staying together.

Bears have a longer lifespan than pigs. They live up to 10-30 years in the wild. In addition to this, the oldest wild bear ever known lived up to 39 years.

Moreover, when bears live in captivity under human care, their life span doubles. They could live up to 50 years. Pigs, on the other hand, live an average of 6-10 years.

However, when humans keep them as pets, they live for as long as 15-20 years. Even a bear in the wild can outlive a pet pig. Hence, bears aren’t only the bigger animals, they also live longer.

Bears are very powerful predators in the wild. These creatures can kill their prey very easily. Bears prey on both small and large animals in the wild.

This is unlike pigs which are mainly prey animals to many predators in the wild. Some of their predators include dogs, coyotes, lions, eagles, and even humans.

Now, let’s look at some of the similarities that must have must have made you think bears and pigs are related in the first place.

Bears and pigs might not belong to the same family, but they are both mammals. They share this common similarity.

What’s more, here are some mammalian features that bear and pigs both have in common:

That’s right! Both bears and pigs can eat both plant and animal-based foods. Bears feed on plants like fruits, vegetables, grains, etc.

Their diet also includes animals such as fish, birds, insects, and mammals. In addition, a bear can also feed on animal dead animal remains.

Furthermore, you should know that bears have diet preferences despite being omnivores. It differs from one species to another.

Bear species like the American black bear prefer to eat more plants than meat. However, polar bears feed mostly on animals. Seals are their favorite!

Similarly, pigs have a broad diet. They have a large appetite and can eat almost anything eatable – plants, meat, and even food waste.

They Both Have Similar Teeth – Nut-Crushing Molars

Bears and pigs both have flat molars, which come in handy when they need to crush certain foods. This could be nuts or similar foods.

In addition, these molars are located on both the top and bottom of their jaws. What’s more, these molars help both of these creatures grind their foods quickly.

These molars are important to both creatures as they have so much food on a daily.

They Both Have Long Snouts

Bears and pigs might not have the same head shape, but they do have long snouts.

One of the main features normally mentioned when describing a bear is the facial profile, particularly its long snouts. It’s a feature that all species of bears have.

Their snouts are pretty long with their noses ending. In the same way, pigs have snouts with large nostrils at the end. This is one of the ways to identify a pig and other members of its family.

Rolling in mud is not only a pig’s thing. Bears like to roll in mud too! And one of the reasons bears do this is to regulate their body temperatures.

So if bears don’t cool themselves by lying stretched out in their belly or resting in shade, they’ll probably roll themselves in mud. Similarly, a mud bath helps pigs cool their bodies, especially when the days are pretty hot.

However, pigs do this for many other reasons too. It could be to get rid of parasites, or protection from the scorching sun.

What is the Closest Relative to a Bear?

Seals (Pinnipeds) are the closest relatives to bears. They are fin-footed and semi-aquatic mammals. Moreover, they have large bodies and long snouts like bears.

In addition, seals are carnivores and their family is divided into the three main groups below:

Above all, seals share the closest evolutionary relationships with bears.

A research made on the evolution of the Canivoran order of mammals revealed that bears and seals had a common ancestor, about 50 million years back.

What is the Closest Relative to a Pig?

Peccaries are the closest relatives to pigs. These are medium-sized pig-like mammals. They’re equally hoofed animals and you might mistake them for young wild boars.

In addition, a peccary might have a striking resemblance to a pig, but they belong to the mammalian family Tayassuidae.

To conclude bears and pigs do not belong in the same family. Bears belong to the Ursidae family whereas pigs are members of the Suidae family.

However, both animals have a lot of differences that prove they’re not related in any way. So remember this:

However, despite the many differences, we learned they still have a few things in common.

Both bears and pigs are mammals with an omnivorous diet. Moreover, both have long snouts!

Giant pandas do belong to the bear family. However, they’re the only members with very unique looks.

So, are giant pandas actual bears or just bear-like creatures? Click here to find out!