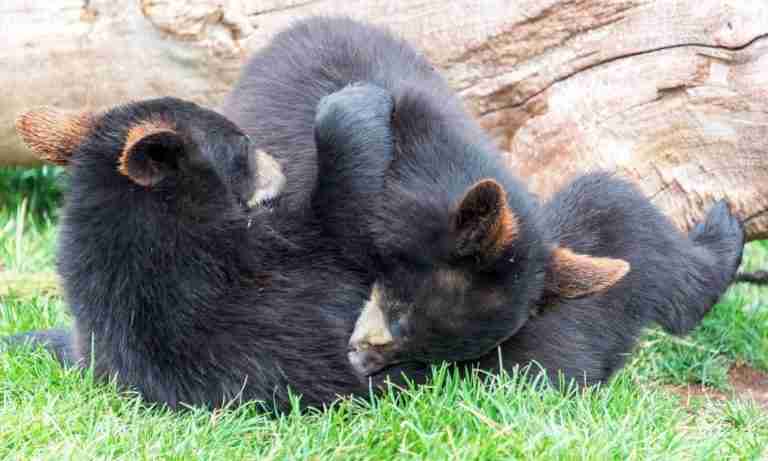 Like the other bear family, the black bears (American bears), may look cute and cuddly.

Hence, you might want to get close to one and rub its back when at the zoo. On second thought, you might be wondering, are black bears friendly?

No, black bears are not friendly animals. Nevertheless, they rarely attack people.

But whenever they’re afraid, they tend to show signs of aggression. This is usually nothing to worry about as these bears will hardly hurt anyone.

American bears are commonly found in human settlements. Still, these are not signs that they are friendly animals.

Now, you’re probably thinking, “Why can’t black bears be friendly?” In this article, we will answer this question and others about black bear behavior.

Continue reading to find out more!

While black bears are not usually aggressive, they cannot be friendly animals. Here are 5 reasons why this is impossible:

1. They Live On Survival Instinct

Generally, bears do not have the best interests of humans or other animals at heart. Bears require lots of food daily and wouldn’t mind getting it in any way possible.

Therefore, their actions are targeted at survival, and they will do anything to achieve this goal. This means a black bear will not think twice before attacking its owner when the need arises.

From the human perspective, acting based on survival instinct alone is not friendly behavior. While the black bears in captivity can be raised to be friendly, don’t get too close to them.

2. They Are Solitary Animals

As with the other bear family, the black bears are solitary animals. So it is hard to see them walking in groups, except for a mother bear and her cubs.

Interestingly enough, the black bears are not even friendly with one another.

Another time the bears come together is when there’s plenty of food in an area. Considering their nature as “loners”, it is impossible to make friends with these American bears.

3. They Are Natural Predators

All the bear families are natural predators, which means they kill and eat other animals. Moreover, black bears are omnivores, meaning they feed on plants and animals.

Most of the time, these bears are controlled by their predatory instincts. While black bears are less aggressive towards humans, they can hunt down potential prey.

4. They Are Wild Animals

Unlike your pet dogs and cats, black bears are not domestic animals. So they can’t behave like these pet animals.

Even though the black bear’s diet majorly involves plants, they have very sharp teeth.

Furthermore, they have claws that are about 2 inches long and a strong body. These qualities help the bears to hunt down prey when they feel hungry.

Generally, bears learn to relate to people quickly, especially those who feed them.

Therefore, it is easy to assume that a black bear likes you because it looks less aggressive. But understand that they are more concerned about one thing – food!

Black bears are unpredictable like the other bear family. Hence, it is hard to know their next course of action. While a bear may be playing with you now, it may attack you in the next minute.

Sure, many bears in captivity can be trained to tolerate people. But it doesn’t change the fact that a seemingly playful bear can harm the people around it.

Usually, it is hard to read the bears’ emotional expressions. So it is better not to get too friendly with them.

Yes, black bears are usually less aggressive than grizzly bears. This can be attributed to their excellent tree-climbing skills, unlike the grizzlies.

Black bears have a lower body weight compared to grizzlies. They also have short, curved front claws that help them grab tree trunks when climbing.

On the other hand, grizzlies have powerful shoulders and long front claws that are mostly good for digging.

When the grizzlies become adults, their size will increase too. As a result, they won’t be able to climb trees again.

If an adult black bear senses danger, it will quickly climb a tree. Since an adult grizzly bear cannot climb trees, it will use aggression as a form of defense.

This is one main reason black bears are less aggressive than grizzly bears.

In addition, they are also among the most dangerous animals in the world. While black bears can tolerate humans, polar bears can be violent toward them.

Under normal circumstances, a black bear will not attack humans. On the opposite, polar bears are not afraid of people and will attack them if possible.

It’s no wonder that polar bears are the deadliest members of the bear family.

Even though they can tolerate humans, black bears are not friendly. Apart from being wild animals, black bears have a solitary nature.

Moreover, they are predators, living on instinct, and are also unpredictable. However, black bears are less aggressive than grizzlies and polar bears.

Regardless, don’t try to act friendly towards these animals because they can launch an attack at any time.

In a case where the giant pandas and black bears engage in a fight, which of the animals will win? Find out the answer here – Giant Panda Versus Black Bear