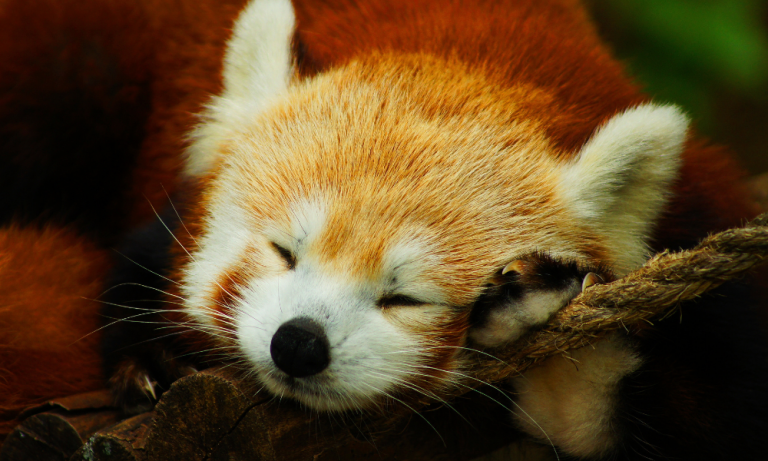 Red pandas are fascinating animals that there’s so much to learn about them. It could be about their habitat, diet, or their behaviors.

Moreover, as a red panda fan, it’s good you know about the birth of these creatures.

Here are 6 common questions about the red panda’s gestation.

Moreover, red pandas are the type of mammals known as placental mammals. Babies develop in the womb of their moms.

There, they are nourished through the placenta that connects the mother and her cub(s).

After a few months of staying pregnant, the female red pandas then give birth to their babies alive.

Are Red Pandas Born in Eggs?

No, red pandas aren’t born in eggs. They are born alive like every other mammal.

They do not lay eggs and cubs do not hatch from eggs. This type of birth is common to reptiles and birds of which red pandas are not.

So, every stage of the red pandas’ pregnancy happens in the womb until the babies are born.

However, this is the same with the bigger pandas, giant pandas.

Also Read: Do Giant Pandas Give Birth or Lay Eggs?

Are All Red Pandas Born Female?

No! Not all red pandas are born female. Moreover, they are not all born males either. They can be either a male or a female at birth.

If it were so, there wouldn’t be both male and female red pandas around the world. So there’s no specific sex at birth.

It’s very possible for all cubs to be females in one pregnancy. However, it’s still possible for red pandas to be only males. Moreover, it could also be a maxed twin – male and female.

How Are Red Pandas Born?

Red pandas are born with fur on them. Moreover, their eyes and ears are closed at birth. But in about 3 weeks, they’ll open.

The fur is thick and grey. It takes about two weeks for the beautiful reddish-brown guard fur to start coming out.

Also Read: What does a Newborn Giant Panda Look Like?

This process of birth starts with a successful mating. A female red panda gets pregnant and it lasts for about 132 days.

When female red pandas have a few days left to give birth, they make birth dens. This is where they’ll give birth to their cubs.

The structure of the den can be tree hollows or even rock crevices. It also will have a nest inside for the birth of their cubs.

Red pandas make these nests out of grasses, twigs, mosses, and leaves. What’s more interesting is that female red pandas make more than one den.

This is for the safety of their cubs. When they notice threats around a particular den, they can move their cubs to another den, a safe one.

After the cubs are born, they nurse for about three to five months. Afterward, they can then eat solid foods – their favorite bamboo.

They’ll also remain in the birth dens till they’re strong enough to explore outside.

Mothers raise their cubs on their own, as males show no interest in their cubs.

Their moms will teach them all they need to know to survive in the wild. However, after staying with their moms for about a year, red panda cubs can then live on their own.

How Often Are Red Pandas Born?

However, they can produce just a cub or a litter of four cubs in a single birth. You should also know that females don’t mate till about a year when their cubs are fully grown.

This means that red pandas don’t give birth every year. They’ll have to skip a whole year to train their young one.

During mating season, female red pandas are only fertile for 1-3 days. So if they don’t get pregnant within these few days, they can’t get pregnant again that same year.

A female is only fertile for about a day or two. About 3 months to give birth. Let’s know how many red pandas are born every year.

Recommended Reading: How Often Do Red Pandas Have Babies?

How Many Red Pandas Are Born Every Year?

It’s difficult to tell the total number of red pandas born every year.

This is because red pandas don’t give birth every year. In a year, it can only give birth once and can have 1-4 cubs.

You should also know that these creatures don’t mate successfully all the time. Male red pandas have the habit of choosing their females.

They don’t mate every female they see. This makes breeding hard and very slow. Zoos even find it hard to breed them.

This poor breeding is also one of the reasons why red pandas are endangered today.

READ: How Often Do Red Pandas Have Babies?

To conclude, there’s so much to learn about the birth of red pandas.

Red pandas are born alive like every other mammal. They don’t come out from eggs.

Newborn red pandas appear way different than a newborn giant panda at birth. They are not tiny compared to their mother’s size.

They also appear with fur on their bodies but can see or hear anything. Mothers care so much for their cubs till they can live on their own.

Moreover, red pandas don’t give birth every year. So, it’s hard to tell the total number of newborns every year.

Hope you found this article helpful. Share with your friends so they can learn more about red pandas too!