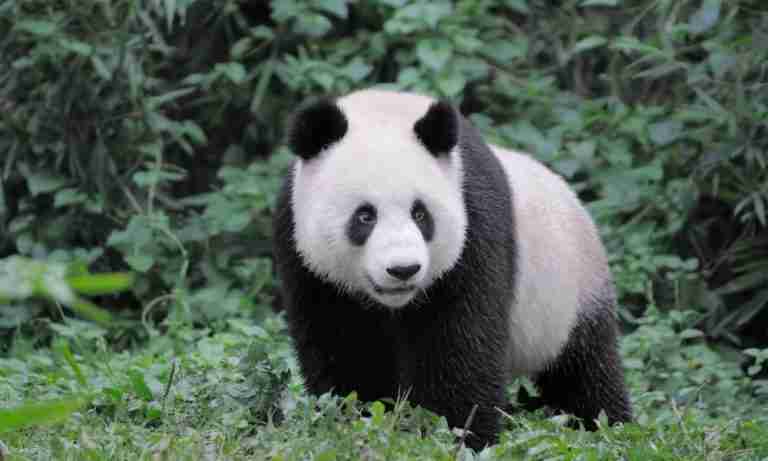 Giant pandas can be seen as adorable and harmless creatures. But did you know that pandas can also be dangerous to us?

In this article, we will discuss 6 different reasons why you should think twice before approaching a panda.

Giant pandas are similar to other wild animals like bears, lions, etc.

Survival is one of the primary instincts that animals have, which makes them wild.

If a panda bear feels threatened or attacked, it will first try to defend itself. This is due to its survival and wild instinct.

However, other than their wild nature, pandas are also very strong. It is the reason that they can be dangerous.

Giant pandas, like bears, are very strong in nature.

Their bite is considered to be among the most powerful of any land mammal. In fact, it is as powerful as that of a hippopotamus or lion.

In addition, their teeth and jaws are designed to crush bamboo stalks. It means that they are capable of causing great harm to humans and other animals.

A giant panda has a bite force of up to 2,603 newtons. A bite force of this intensity is more than enough to break the bones of another bear!

For example, there was a panda named GuGu in the Beijing zoo. The panda, which weighed 240 pounds, held the leg of a visitor. As per the news, the visitor entered his territory in order to take a toy for his child.

The man climbed over a barrier that was 5 feet tall to get into the panda’s zone. And certainly, this made GuGu annoyed.

However, the zookeepers were able to stop the panda’s jaws open and save the victim. But the visitor had to undergo surgery for the recovery of damaged ligaments.

The canine teeth of an adult giant panda have the power to create a force of 2,603 newtons.

This force is so powerful that it can separate a piece of meat as easily as peeling the rind off of a tangerine.

In addition to this, the size of a panda’s back teeth is almost seven times greater than that of a human’s teeth.

They are built to be able to eat bamboo and chew through thick fibers.

Other than their sharp teeth, they also have strong claws and a strong grip.

Giant pandas have very big and strong claws, which can be dangerous to humans.

The “six” fingers that pandas have on the large pads of their claws serve mostly as a grip for the panda. They help them in climbing or clutching a bamboo stalk.

Their paws are extremely sharp and capable of easily tearing apart the skin of their prey.

So, it can be highly dangerous if they feel threatened and attack you with their claws.

Even though pandas eat bamboo, they were once carnivorous. Their digestive system can still digest meat.

So, since giant pandas still have that trait, they can also attack human beings.

Although chances are very low, one should keep in mind that they were once carnivorous.

Pandas normally stay calm but can still be aggressive sometimes.

In the zoo, they are kept in small cages. It can cause them to feel stressed out and like they are being caged.

Because of this, they may sometimes be aggressive toward any people who attempt to interact with them.

Giant pandas are aggressive also because they are wild animals. And due to their aggressive nature, pandas pose a threat.

Attacks on humans by pandas are extremely uncommon, although sometimes they do it.

But most of the time, it happens when they feel threatened or afraid.

There have been some incidents of pandas attacking humans despite the attacks being uncommon.

In addition, there have been reports of pandas attacking humans while they were in zoos.

When Can Pandas Be Dangerous?

Pandas can be dangerous when they are threatened.

In several regions of China, giant pandas are still hunted. So, their survival instinct makes them feel threatened when they witness any activity that can harm them.

When they feel threatened, they instantly stand. They also open up their claws to look larger, so the predator runs away.

Furthermore, there are many cases of people being attacked by pandas who claimed they were acting in self-defense.

It is quite unusual for giant pandas to approach humans in the environment because their primary focus is on locating food.

A huge panda will only attack a person if it senses that they are a threat to its own safety. It would be very unexpected if a giant panda would harm a human being without feeling threatened.

Giant pandas like to stay calm and be alone. But if annoyed, they can be dangerous too!

If you try to hold and cuddle with a panda, it may get annoyed and harm you.

There are few cases where the pandas attacked humans because it was annoyed.

CCTV footage taken inside the Nanchang Zoo in Jiangxi Province shows a man jumping into the enclosure of a big panda there.

In this video, it shows the so-called “casual visitor” making fun of a panda while it was sleeping. The animal was most likely extremely annoyed and started wrestling.

And there’s no question about who came out on top.

The intruder fought with the male panda named Meiling, who was 12 years old at the time, for a period of five minutes before he was able to escape the cage.

So, giant pandas may look cute but never annoy an animal like it.

Can Pandas Kill You?

Yes, there’s a possibility if it wants to.

Pandas have all the required weapons to take down any man still alive.

He accidentally fell into that panda’s area by accident while visiting Beijing City Zoo.

The giant panda bit him in the elbow joint on his right side as well as his left foot. After operating the wound, a VSD procedure was carried out.

How to Stay Safe From Giant Pandas?

There are four basic steps you can take to prevent yourself from a giant panda attack. Follow the ways mentioned below.

Maintaining your distance from a panda is the most effective way you can take to protect yourself from being attacked by giant pandas.

Make every effort to maintain a distance of at least 30 feet from a panda. If you are unable to avoid coming into contact with one, you should learn how to keep yourself safe.

When you go hiking, you should always have a first aid kit with you. These supplies will assist you in treating any wounds if attacked by a panda.

You should dress in clothes that are made of durable materials such as denim, leather, and nylon. When you get scratched by a panda’s paw, these materials won’t easily rip apart like other fabrics might.

If you live in an area where pandas are held in captivity, it is necessary that you teach your children to avoid approaching these animals at all costs.

Also, keep your children aware of the dangers of giant pandas.

Most people have always believed that giant pandas are adorable animals who just eat bamboo. However, people have never dreamed that pandas could be dangerous for human beings.

But pandas are dangerous animals. They are wild, strong, and have huge jaws and claws. They have more than enough strength to take down a human being.

In other words, giant pandas have all the things that are dangerous for you.

So, to prevent yourself from being attacked by a panda, you have to maintain a safe distance from them.

In this blog, we have seen that giant pandas can be dangerous to humans. Is it the same with red pandas? Click here to find the answer!