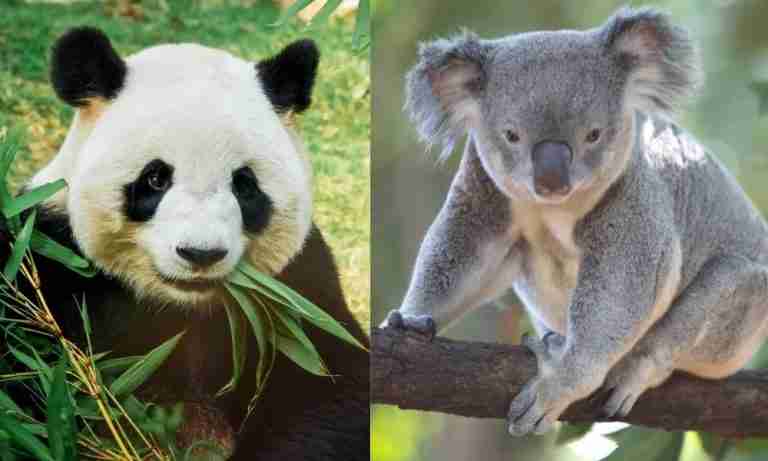 Does this mean pandas and koalas are related to one another?

Absolutely not! Giant pandas and koalas are not related in any way. They both belong to different families.

In addition, they do not share the same ancestors, origin, or fall under the same category of mammals.

You should know that pandas and koalas differ in many ways. Let’s see some of these differences below…

Koalas do not share the same bear family as giant pandas in any way. These creatures belong to the family, “Phascolarctidae”, which means “pouched bears”.

Interestingly, koalas are the only living members of this marsupial family. Koalas might have some teddy bear-like appearance but they are not related to bears at all.

They are marsupials and are related to kangaroos, wombats, etc. Moreover, just like every other marsupial, koalas have pouches around their tummy area.

Pandas don’t have it because they’re not marsupials and are in no way related to koalas.

Giant pandas are big and chubby animals. These black and white bears measure about 1.8 m (70 inches) in body length.

Additionally, they weigh about 300 lbs.(136 kg). Female pandas weigh less. Koalas, on the other hand, are smaller creatures compared to giant pandas.

Now when you look at the sizes of both animals, you’ll see that pandas are giants to koalas. A size that is much expected of a bear.

Another difference between pandas and koalas is their habitat. Pandas are terrestrial animals. This means they live on land.

In addition, giant pandas do not have a permanent place of shelter. This means they could take shelter in caves, trees, or even the forest grounds.

So you’re wrong if you ever thought pandas mostly live in trees. Koalas on the other hand are arboreal animals. And unlike giant pandas, they mainly live on trees all their lives.

Interestingly, koalas live in the same trees they get their food from – The Eucalyptus trees.

Pandas are native to China. Their natural homes are in the mountainous parts of China, especially the Sichuan Province. There, they live in great bamboo forests.

Now when talking about koalas, these creatures are iconic creatures of Australia. Koalas are native to Australia, especially in the Southeastern and Eastern parts.

In Australia, you’ll find them in the Eucalyptus forests. As you can see both animals are not native to the same place.

Neither are they from the same continent. Giant pandas originate in Asia and Koalas are an Australian species.

Giant pandas bleat and that’s not something koalas do. These black and white bears also make a couple of other sounds to communicate with one another.

The sounds include squeaking, growling, huffing, and barking. Koalas, on the other hand, sound different.

They mostly make deep bellowing sounds (shrieking). Moreover, they make a lot of other sounds to communicate with themselves.

Snarling and screaming are among the sounds you’ll normally hear a koala make. And these aren’t the sounds pandas make.

What Do Pandas and Koalas Have in Common? (6 Similarities)

This is the most common similarity between the panda bears and koala bears. They’re both mammals despite belonging to different families and categories.

As mammals, they both share similar mammalian characteristics. And they include:

An interesting alone too!

Both creatures love having a particular area to themselves rather than living in groups. You’ll mostly see these creatures with another of their kind during mating seasons.

That’s right! Pandas and koalas are herbivores. And not just any kind of herbivore, both of these creatures have their favorite plant food.

Pandas are popularly known to be leaves (or gum leaves) – The leaves of the Eucalyptus trees they live in. They just love it!

In addition, both the bamboo and Eucalyptus diet are not so nourishing. Hence, both pandas and koalas animals need to eat a lot of these plants in a day to meet their nutritional needs.

Koalas will spend about 4-6 hours eating lots of Eucalyptus leaves. Pandas, on the other hand, spend more than half a day eating bamboo. That’s amazing!

Both pandas and koalas are vulnerable on the IUCN Red List of threatened species. Hence, giant pandas are not extinct and that’s just the same case with koalas.

However, being vulnerable means that they are both at high risk of extinction in the wild. A kind of extinction that’s likely to be caused by human activities and not natural causes.

Pandas and Koalas are Excellent Climbers

Giant pandas are great climbers. And this comes in very handy when they want to take long lazy naps on tree branches above the forest floor.

Pandas can climb as high as 13,000 ft. That’s incredible for round chubby creatures, who are pretty clumsy as well.

Additionally, koalas are great at climbing too. And they can climb as high as 150 ft. Climbing is a must-have skill for creatures like koalas that spend their lives on trees.

A koala’s climbing skill helps it travel through trees. A kind of movement known as arboreal locomotion.

Both Creatures Have Extra Digits on their Paws (Semi-Opposable Thumbs)

Another striking thing pandas and koalas have in common is the presence of extra digits on their paws.

A panda has five true fingers plus a semi-opposable thumb. This isn’t a real thumb but looks and acts like one. It’s known as a panda’s false thumb.

Koalas on the other hand have three fingers on each paw and two opposable thumbs. This means on the thumb section of a koala’s paws, there are two unique digits.

That’s two thumb-like digits for each paw! They act like thumbs but are different from the other three true fingers.

In addition, both pandas and koalas’ extra digits help them a lot when climbing. It gives them a good grip on thinner branches.

Allowing them to reach higher parts of a tree. Now you see why both of them are great climbers.

To conclude, pandas and koalas are not related. The main reason is that they belong to different families.

Pandas are relatives to bears but koalas are not. Koalas are only called koala bears because of their looks.

Koalas are pouched animals like other marsupials. And these pouches are what pandas don’t have.

Both of these creatures are native to different parts of the world. However, despite the many differences they have, they have so much in common.

Pandas and koalas are both herbivores and have a favorite food. Moreover, they’re both excellent climbers.

It’s clear now that panda bears and koala bears aren’t related at all. However, would it be a different case for another panda like the red pandas?

Click here to find out if red pandas are giant pandas relatives in any way.