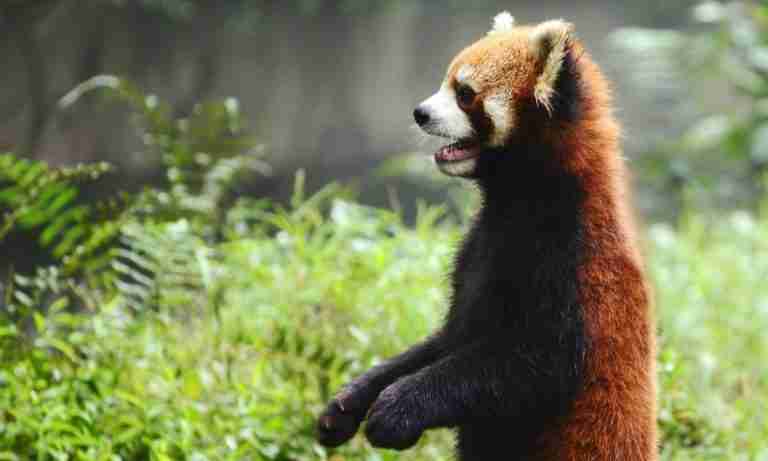 Red pandas are shy and peaceful creatures. However, they live alone and this makes them more vulnerable to danger.

So, when they face danger around them, how do they protect themselves?

Red pandas stay high above trees to be safe from predators on the ground. A nearby tree is always the best way for red pandas to escape predators

Moreover, they use their sharp claws to defend themselves. This happens when they cannot escape any predator.

Red pandas also wrap themselves with their tail to protect their bodies from harsh weather conditions.

Now let’s look at the different ways they protect themselves in detail and what makes them do it.

Staying High Up in Trees

Red pandas do little on the ground and so much on trees. These trees don’t just serve as shelters for red pandas.

Staying high up on trees is a way red pandas protect themselves. Red pandas can even move and travel through trees.

This is a way they can avoid any danger on the ground. Moreover, even when red pandas want to take their long lazy naps, they do it up in trees.

There, they’ll be safe from any predator attack that can always happen when they nap on the ground.

When red pandas feel threatened or face danger from their predators, they have a common way they defend themselves.

They’ll stand on their hind legs to make themselves look bigger. Then they’ll spread out their paws with sharp claws.

They also make aggressive noises and stay very alert to strike. However, they do this when a predator is very close to them.

Covering Their Bodies From Harsh Weathers

Of course, the red pandas also protect themselves from harsh weather conditions. Red pandas in the wild live in environments that often get pretty windy and cold.

So when the weather gets very harsh in their habitats, they will wrap themselves with their bush tails.

These tails are thick and broad enough to keep their bodies safe from these conditions. It’s just similar to when you cover yourself with a blanket during cold times.

How Do Red Pandas Protect Their Territory?

Red pandas protect their territory by marking the area with strong scents.

This is to make sure other male red pandas don’t intrude on their shelter. This is one of the ways red pandas communicate.

They’re trying to tell other male red pandas that they own the area. So, they should back off!

The scents they use comes from a scent gland that is at the base of their tails or under their feet.

You should know that they are only territorial with their kinds, particularly males. So, it doesn’t mean other animals don’t live around them.

This is one of the main body parts of the red pandas. It makes the creature beautiful but also helps the red panda survive in many ways. See them below:

Their thick fur keeps their bodies warm. This is why the red pandas can comfortably live in cold and snowy environments.

Their reddish-brown fur camouflages the red panda well in their surroundings. This helps to keep them out of the sight of their predators.

Red pandas have a carnivorous digestive system that isn’t made for plant foods at all. What’s more interesting is that these creatures survive on mainly bamboo.

This means that digesting bamboo will be pretty difficult. However, their sharp teeth help to make digestion easy.

They can grind these hard bamboos in a way their system can digest with ease. Without their sharp teeth, they won’t be able to survive as bamboo eaters.

This is one of the less common body parts of a red panda. However, it has helped this creature over the years.

Red pandas survive on mainly bamboo. So they need to eat much in a day and fast to meet their daily nutritional needs.

These false thumbs help them handle bamboo shoots and a bunch of bamboo leaves easily as they eat. It makes them quick in eating which is important for them to survive.

RECOMMENDED READING: Do Red Pandas Have a False Thumb?

The Red Panda’s Claws and Tail

As you might already know, red pandas live and do so much on trees. This is one thing about a red panda. They’re arboreal creatures!

In addition, they’ve got good climbing skills. One that’s better than that of a leopard and many other arboreal animals.

However, their tails and claws are body parts that help them climb so well. Their tails help them stay balanced as they climb.

Their tails help them stay balanced as they climb. Their sharp claws, on the other hand, hold them tight on branches and trunks.

All of these also come in handy when they have to move quickly up to trees. Probably, to escape predators or any other threats they face in their habitat.

What Are Red Pandas Predators?

RECOMMENDED READING: Does The Red Panda Have Any Predators?

In summary, red pandas have many ways they protect themselves. They stay high up in trees where predators can’t reach them.

Moreover, red pandas can defend themselves with their claws whenever they can’t escape. These creatures can also protect themselves from harsh weather conditions.

They do this by wrapping themselves with their tails.

Hope this article was helpful? Don’t forget to share it with your friends!