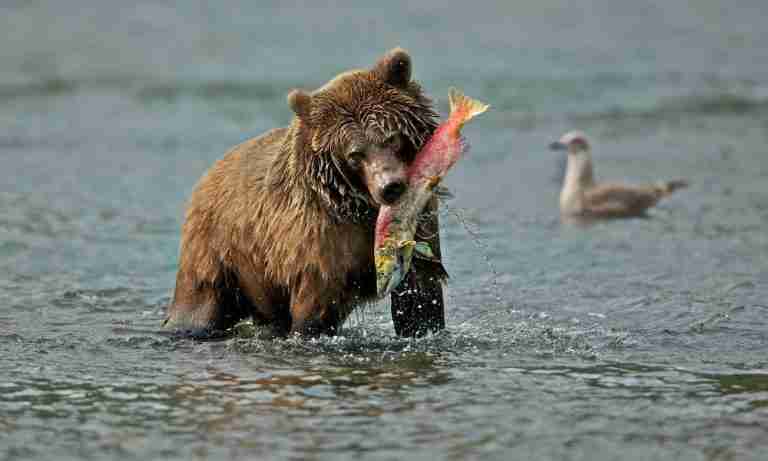 Grizzly bears are known as ‘’The King Of the North’’. This is because they are powerful predators. And this makes me wonder, do they have any natural predators?

Here’s what I found out –

Grizzly bears do not have any natural predators in the wild.

They are known to be fearless animals so almost all animals avoid hunting them.

Occasionally, Siberian Tigers, Wolves, Humans, and Cougars might kill a young grizzly bear, but that doesn’t mean they are predators.

This can be described as a dominance confrontation.

You can now tell that grizzly bears do not have natural predators; but do you know why?

Let’s find out the reason below.

Why Grizzlies Don’t Have Any Natural Predators

Grizzly bears do not have any natural predators because they dominate the food cycle in their environment.

They sit on top of their hierarchy, therefore, eat everything below their position. In addition, grizzly bears are also large and powerful creatures that can confront danger and attack the source.

Humans hunt and kill grizzly bears for food and their fur. In addition, meat is a rich source of protein for the human body, especially for North American natives and settlers.

They commonly use it as meat in stew, braises, chilis, and sauce.

Although grizzly bears are always prepared to pounce on anything or anyone that appears as a threat to them or their cubs, Siberian tigers sometimes get lucky to have them as food.

They catch and eat large prey animals including grizzly bears, especially their cubs and weaker females.

Studies have shown that grizzly bears occasionally get killed by wolves, but most times it is their young ones and weaker adults.

Cougars (aka mountain lions or puma) are a large cat species predominantly found in America. They sometimes fight and eat grizzly bears.

But this predator mainly focuses on grizzly bear cubs rather than the adult species because of the grizzlies’ physical superiority over them.

Apex predators are animals on top of their food chain. They have few enemies and almost no natural predators.

They are big animals that kill and eat their prey animals.

Animals that can prey on grizzly bears are only apex predators of other food chains (e.g. Humans, tigers, and wolves) but they do this to young grizzly bears

To summarize, Grizzly bears do not have any natural predators.

This is because of their position as apex predators in their food chain.

Sometimes, these animals confront adult grizzlies and luckily win. However, this doesn’t make them natural predators of the grizzly bear.

Now that you’ve learned that grizzly bears are apex predators, does it mean they hunt animals and eat meat?