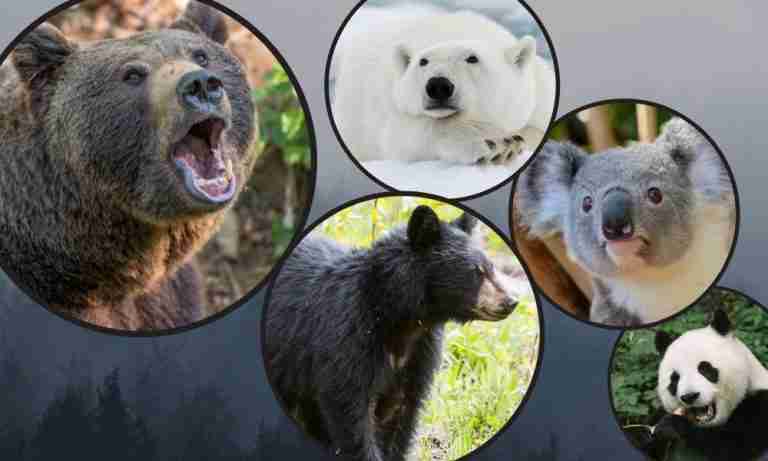 I’ve recently watched a video of a bear hunting at night. Does that mean bears are more active at night?

Bears are not diurnal or nocturnal. They are crepuscular animals, which means that they are most active at dawn and dusk.

But several factors like seasonal changes, weather, and human activities can make them adapt to diurnal or nocturnal habits. And these habits generally depend on the bear’s species and gender.

Having to know this, wouldn’t you like to know the different bear species that are nocturnal or diurnal?

Are Black Bears Nocturnal Or Diurnal?

Black bears are diurnal. This means they are most active in the daytime in their natural habitat. However, they can be active at any time.

Black bears have a great sense of smell and a massive appetite for food! Therefore, they mainly hunt for their food during the day.

Are Brown Bears Nocturnal Or Diurnal?

Brown bears can be either nocturnal or diurnal.

The habit they adopt depends on their gender and the climatic condition.

According to studies, North American brown bears are basically diurnal but their capture efficiency can be higher at night with a ratio of 2:1.

During the breeding season of salmon, a female brown bear with her cubs feeds in the daytime. While the adult male species hunts and eats at both times of the day, largely at night.

Are Grizzly Bears Nocturnal Or Diurnal?

Just like brown bears, grizzly bears are either nocturnal or diurnal.

This is because grizzly bears easily adapt to their environment.

While they can adjust to being active day or night, they are also affected by human activities. Their gender plays a huge role in the adaptive measure of a grizzly bear.

Male grizzly bears are mostly nocturnal or crepuscular. On the other hand, the female species and her young ones tend to be diurnal.

Are Polar Bears Nocturnal Or Diurnal?

Polar bears are neither nocturnal nor diurnal. They are found in polar regions, where they undergo months of darkness and months of daylight (midnight sun and polar nights).

This makes them active at any time of the day. In addition, it also helps them sleep when they feel the need, up to 7-8 hours daily.

Similar to other animals, polar bears hunt for their food when they think it is available.

If the seals of the territory are active at night, that is when the polar bears will hunt for food.

Are Sun Bears Nocturnal Or Diurnal?

They behave opposite to their name, “Sun Bears” and roam throughout the night looking for and eating food. The sun bears are characterized as the least species of bears and are naturally shy.

Their habitat is mainly tropical forests, and the type they inhabit depends on the geographical area.

Are Sloth Bears Nocturnal Or Diurnal?

Sloth bears are nocturnal. They are nocturnal species of bears that go about their daily hunt for food when the day begins to fall.

Sloth bears are shy just like sun bears and are usually found in tropical forests too.

Many factors can affect the sleeping pattern of bears, but let’s look at three major factors:

Human activity is one of the main factors that affect a bear’s sleeping pattern.

Animals that live in the wild, including bears, have a natural fear of human beings.  They stay far away from humans because they’ve realized that humans are dangerous.

Bears that are used to humans or that live around them are more likely to be active at night.  This could be because these bears realized that people are not usually active at night.

Bears are mainly not active in winter.  They hibernate for up to six months in their den due to their natural adaptation to colder climates.

They do this to conserve energy, sleeping throughout the period owing to food scarcity.

To prepare for hibernation, bears eat up to 90 pounds (40 kg) of food every day.

During hibernation, the bear’s temperature decreases, and its heart rate slows significantly.

In summer, they come out and look for food, they are seen roaming around during the day.

This may be because male bears are polygynous, meaning they are attracted to female bears with whom they can mate.

What Time Are Bears More Active?

Bears are mostly active at dawn and dusk during spring and summer hence, the reason they are called crepuscular.

But as stated earlier, a bear’s active time depends primarily on its species and gender. It differs from species to species.

The table below summarizes the active time for each bear species.

Which Bear Is The Most Active At Day?

Black bears are the most active bears during the day, mainly when they are in their natural habitat.

Which Bear Is The Most Active At Night?

The sloth bear is the most active bear species at night. It goes about its daily hunt for food a little while after sunset.

Which Bear Is The Most Active At Dawn?

Black bears are the most active bear species at dawn. In fact, they wake up about half an hour before sunrise.

A bear’s lifestyle is influenced largely by human activities, seasonal changes, and gender.

Black bears are the head of diurnal bears, pandas take the lead for the most active at dawn while sloth bears carry the crown for nocturnal species.

Now that it is clear to you that bears are crepuscular animals, won’t you like to know what gives them their powerful sense of smell while hunting?

Read our article “Do Bears Have Whiskers?” to learn more.