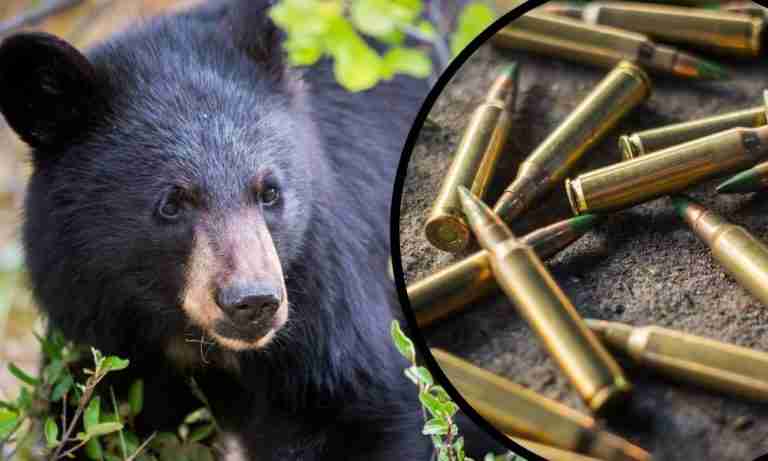 In many bear attacks, people have argued that guns couldn’t harm the bear at all. Similarly, there are cases where bullets seem to bounce back on the bear.

In this article, I will answer some commonly asked questions about bears and bullets.

In addition, you can kill a polar bear with a gunshot but it’s not easy. It requires perfect aiming at the weaker and vital parts of their bodies.

Among all species of bears, polar bears are the bears with the thickest skin. Only their fur is about two layers and below their fur is their skin, which is about 4 in (10.16 cm) thick.

No, grizzly bears are not bulletproof. This is equally a myth. Additionally, due to grizzlies’ thick fur, heavy hides, and large muscles, bullets don’t penetrate their bodies with ease.

In addition, these bears have strong, large skulls and bones, which keep a bullet from piercing their bodies.

No, black bears are not bulletproof. These medium-sized bears also have thick skins and huge muscles that are almost bullet resistant.

Moreover, black bears’ guard hairs covering their outer bodies act like outer shells. And this adds to the reasons why bullets don’t penetrate them easily.

Nevertheless, a black bear is not as big as grizzlies and polar bears. Hence, it’s easier to shoot a black bear than the larger kinds of bears.

What Makes a Bear Almost Bulletproof?

Generally, a bear’s body structure makes it nearly a bulletproof mammal. They have very thick hides with very dense fur as their outer covering.

Now, if you explore inside their bodies, here’s what you’ll see:

All of these don’t allow the free bullet to freely pierce their bodies.

If a bullet were to pierce a bear, it will have to pass through the hides and the thick muscles. They can reduce the damage a bullet will cause.

Moreover, if the bullet meets its hard bones, it won’t go any further.

Can a Bullet Kill a Bear?

Yes, a bullet can kill a bear. However, it’s not just any bullet! For defense against bears, the cartridge should be a .44 Magnum or anything more powerful.

According to some old-time black bear hunters, any load of a gun that throws about 200-grain or bigger solid bullets at a minimum speed of 1000 fps (feet per second) can kill any bear.

Similarly, a .44 Magnum It also throws up to 300-grains. Moreover, it provides bullet speeds that are above 1000 fps.

This makes it a powerful bullet capable of taking down large animals like bears. What’s more, it can accomplish this at far distances, about 50 yards.

Hunting and killing of black bears are illegal in some states. So you need to be sure your state allows it before you think of hurting these bears.

How Many Bullets Can a Bear Take?

A single bullet is enough to kill a bear as long as you can get the vitals. Moreover, it takes a good shot or a lucky shot to achieve this.

In addition, killing a bear with a single bullet depends on the kind of gun and bullets. Not every gun and bullet can make this happen.

Usually, large-caliber guns will do the trick!

Furthermore, if the bear is charging at you, you’re likely to empty your firearm on the bear. It’s not easy to make one successful shot in this situation.

However, for bullets that aren’t powerful enough for bears, you might need to fire many bullets to do more damage.

Yes, an Ak47 rifle will stop any bear. All you have to do is place the shot accurately on the bear’s vital organs.

Many poachers use AK47s to hunt bears, so it’s a very effective assault rifle for bears.

Even if you have a bolt-action (not auto-loader) AK-47 that has only a 5-round magazine, you will take down fully-grown bears.

What Shot Can Stop a Bear?

Basically, any shot that could hit the vital organs of the bear will stop it. However, here are the most effective shots for stopping bears below:

When you’re hunting a bear in the woods, all you need is one good lung shot. This shot is the most effective against a bear.

In addition, a more effective way to take this shot is to go for a “double-lung shot” – the most deadly shot of all.

This way, you’ll hit the two lungs of a bear at once. Though not instantly, a lung shot will take a bear down quicker than a heart shot.

Moreover, you should understand that the bears’ lungs are large organs which equally means large targets. It equally means you can’t easily miss, unlike other shots.

Another thing to know about targeting a bear’s lungs is that these organs aren’t close to the large bones that could prevent bullet penetration. This is unlike the brain or heart.

A shooter can achieve a double-lung shot mostly when the bear is in a broadside position. And the target is about 4-5 inches back from the bear’s shoulder

Another deadly shot to place on bears is the brain shot. I would not call this a headshot because of how specific it has to be.

Most headshots made on bears are ineffective due to their thick skulls. Hence, only a bullet to the brain works.

Interestingly, if you hit a bear’s brain, it can stop its nervous system at once and equally kill it. This shot is best against an attacking bear.

However, it’s a small target, unlike the lungs. This makes it a bit challenging to pull off, despite being an effective shot.

It’s also a smaller target but can kill a bear. A bear’s heart is below their bodies around the chest region.

If you get the top of the heart, it’s better. This way, you can hit the heart and part of the lung at the same time.

Similarly, you need to be very accurate when placing a heart shot. A bear’s heart is a small organ, which makes it a small target.

Can a Handgun Stop a Bear?

Yes, a handgun can stop a bear. However, it depends on the type of handgun you use. A Glock 20 is the best bear-defense gun.

This is because Glock 20 comes will many great advantages that help in taking down bears. One of them is its accuracy.

Shooting a bear successfully primarily requires accuracy. Interestingly, this handgun offers that! Furthermore, the Glock 20 enables a shooter to take follow-up shots at a fast pace.

Moreover, the Glock 20 handgun has a magazine that’s very large with a large bullet-containing capacity. It’s equally a handgun you can easily carry and easily shoot.

Aside from the Glock 20, here are other best handguns that you can use against a bear:

Handguns are very successful in killing bears than long guns due to many reasons. A handgun is an easy weapon to carry around.

Normally, you will have to carry long guns on a sling. This makes it hard to quickly position for shooting.

Above all, handguns are always within reach than a long gun can. So it’s a better firearm weapon to be with, especially during unexpected bear encounters.

Can a Bear Survive a Headshot?

Yes, a bear can survive a headshot as long as the bullet did not hit its brain. In addition, bears have large skulls that surround their brain.

A bear’s brain is small compared to its massive skull, so it’s not easy to hit. Moreover, the skulls on their own are very strong that rifle bullets or shotgun slugs will fail to pierce them.

If you were to successfully kill a bear by headshot, you should aim for the weakest part of its skull. And this part is located behind a bear’s face.

Specifically, it’s in a small area shaped like a triangle. Moreover, it’s almost surrounded by the eyes and the tip of the nose.

If you shoot this area of their skull, there’s a high chance that the bullet will pierce the head and hit the brain.

Will a Gunshot Scare a Bear Away?

Sometimes, instead of a gunshot scaring a bear away, it can provoke it into charging at you, which isn’t a good situation. Hence, when you encounter a bear, do not assume it will back off when you fire warning shots.

They are smart and if they notice the gunshot noise doesn’t harm them in any way, they will have no reason to fear it again.

Simply put, bears are not bulletproof. It’s just a myth and you now know why bullets might not harm bears sometimes.

Remember that bears’ hides, muscles, and bones, and are all very tough and heavy for bullets to penetrate. But if you accurately aim and shoot a bear’s vitals, they will die.

In addition, AK-47 rifles and many other large-caliber guns are effective against bears. Many bear hunters have used these guns to take down bears in the woods.

Understand that bear hunting is legal in many parts of the world. However, it includes all species of bears except the panda bears.

That’s right! It’s highly illegal to hunt giant pandas in the wild. This, among the many factors, that have kept the endangered today. Click here to know more!