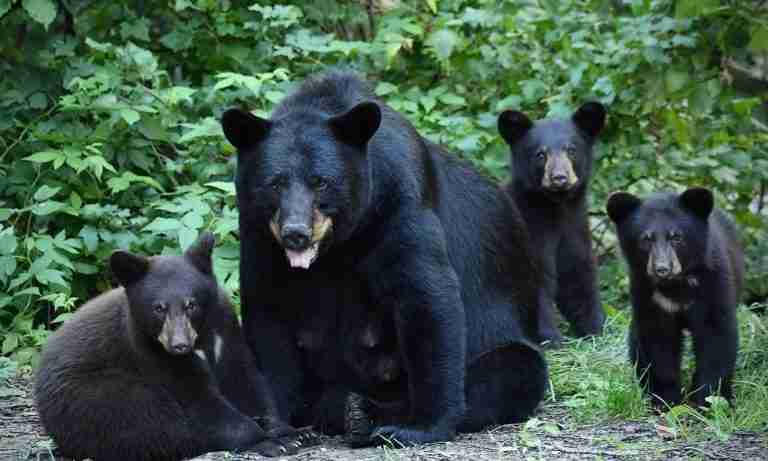 Most bears are known to eat members of their own species — a behavior known as cannibalism. But for plant lovers like the black bears, will they go as far as eating their kind too?

For this reason, they are predators of their own species.

In addition to this, both the American black bear and the Asiatic black bear do cannibalize. What’s more, this behavior is casual, opportunistic, and not something they often do.

Having known black bears are cannibals, keep reading to fully understand why black bears will eat their kind.

Why Do Black Bears Eat Their Own Kind?

Black bears don’t eat their kind very often. Cannibalism in black bears happens due to some reasons. See them below:

Black bears will eat their kind, especially other adults, to increase their fitness. Moreover, this is the most common reason for cannibalism in black bears.

That fact that males mostly cannibalize for this reason. What’s more, they will either kill or feed on already dead black bears.

They need more calories to build body fats and muscles. And a black bear itself is a large creature that’s loaded with calories.

Hence, black bears will take in more calories by eating other adult black bears than by feeding on other animals.

Black bears do not eat their kind often. When they are starving and are nutritionally stressed, they react unusually and will cannibalize.

A black bear will want to survive at any cost. And if hunger puts their survival at risk, they can kill and eat their kind when they get the slightest chance to do so.

What’s more, this cannibalistic behavior is predation-driven. Black bears will prey on their kind just like any other source of food.

Sadly, they will mostly go for cubs and smaller females since they are easier to kill. A very hungry black bear will also feed on dead black bears.

Above all, the aim is to boost their chances of survival.

A male black bear will kill and feed on the cub of a female so it could mate with her. As it kills the cub, it will stop lactation in their mothers.

Hence, the nursing females will now go back into heat and become available for mating. It gives the males a chance to mate with these females and produce cubs of their own.

Additionally, male black bears will mostly kill cubs that are not theirs. This kind of cannibalistic behavior is known as sexually selected infanticide.

Interestingly, this act doesn’t guarantee that the male will get to successfully mate with the females.

To Reduce or Eliminate Competition

Another reason for the black bear’s cannibalistic behavior is to reduce the competition in their area. This could be competition for food, breeding, range, etc.

Interestingly, it’s mostly males that kill and eat their kind for this reason. They will often kill and eat other black bears, especially males.

Moreover, these bears mostly attack younger and less dominant black bears. As they reduce their competition in their area, it helps boost their chances of survival.

How Do Black Bears Cannibalize?

When black bears are hungry and need to survive, they can kill and feed on other adult black bears just like any other food source. Funnily, other black bears mean more calories and black bears know this.

So adults help them boost their fitness. Most of the time, black bears will go for adult female bears, which are relatively smaller.

However, they can also feed on male black bears to lessen the competition for mating and resources. It’s just about surviving!

Black bears can eat their young ones. Eating infants is cannibalistic behavior that’s more common in males than females.

Female black bears, like every other female bear species, have a strong maternal instinct. Hence, they do not eat their cubs.

Male black bears can kill and eat young cubs, especially when food is scarce in their area. Cubs tend to be easy sources of calories.

In addition, they can’t defend themselves. So black bears see this as an easy meal.

Furthermore, infanticide commonly happens during breeding seasons. During these times, black bears kill and eat unrelated cubs, especially those of their competitors.

Now when you talk about cannibalism in black bears, the scavenging black bear carcass is most common.

Understand that it’s a normal thing for black bears to eat dead animals since they are scavengers. Interestingly, eating carcasses of their kind isn’t an exception.

In addition, eating dead black bears is a cannibalistic act that both males and black bears do. No particular sex of black bear does it more than the other does!

Do Black Bears Eat Other Species of Bears?

If a black bear should see a dead grizzly, polar bear, or any other kind of bear, it can feed on it.

To conclude, black bears are cannibals. However, they do not behave this way all the time.

A black bear will kill members of its species for different reasons.

Additionally, when black bears cannibalize, they eat adults, infants, and also dead black bears. And cannibalism is most common in male black bears.

Generally, it might seem immoral and an unpleasant act, but these bears are just surviving at all costs.

Despite the black bears being cannibals, you should know that they prefer o eat plant foods than meat.

These species of bears survive mostly on plants. Does this make them vegetarians? Click here to find out!