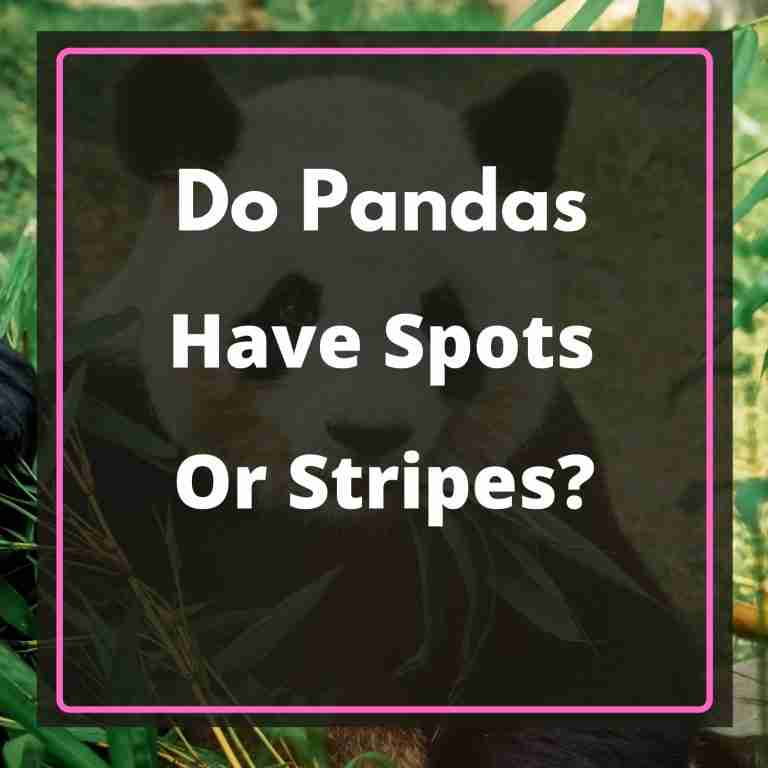 Seeing animals with different patterns gives me the chance to appreciate the wonders of nature. Cheetahs, leopards and many other animals have spots while zebras have stripes. Now, this leads to the question, do giant pandas have spots or stripes?

Here’s a simple answer, giant pandas neither have spots, nor stripes. All they have are black and white patches or furs that help them to survive in the wild.

To some extent, I believe you now know that giant pandas do not have stripes or spots and why they have their black and white patches. However, there are other important details about giant pandas’ body patterns that you need to know. Examples are, why do they have black spots? Are there albino giant pandas? Is there a panda with no black spot?

Why don’t you read this article to the end? Not only will you be educated, but you will also have a fun time.

Let’s move on to the other questions;

Why Do Pandas Have Black & White Patches?

This study was made known by the research team from the University of California and California State University after several unclear research had been carried out. And the result was published in the journal of Behavioral Ecology.

Finding out the reason for these patches encouraged a group of researchers, led by Professor Tim Caro, to carry out a study on the large, furry animals. Fortunately, they were able to come up with a meaningful explanation.

Unlike bears, pandas are always active during the winter months as their bamboo diet makes it difficult to store fat. Their white face, belly, neck and rump helps them to hide in habitats filled with snow. On the other hand, their black arms and legs help them to hide in shades.

In other words, the giant pandas white and black body pattern helps them to survive in different habitats, whether filled with snow or trees (forests). That’s nature’s way of enabling their safety from predators.

Why Do Pandas Have Black Patches around Their Eyes?

Studies have shown that the dark patches around giant pandas’ eyes help them to recognize one another in different habitats.

Naturally, giant pandas are nocturnal animals – they can only see well at night. And even though they have sharp ears and senses, their vision during the day is poor. Luckily, studies have shown that the black rings around their eyes help them to identify one another.

Keep in mind that giant pandas are solitary animals, but it doesn’t mean they don’t need the company of others sometimes. For example, during the mating period, the females attract the males with their scents. However, they must recognize each other for mating to be possible.

How Did Pandas Get Their Black Patches?

Pandas get their black patches a week after birth, which is nature’s way of protecting them from predators. Usually, most giant pandas have a pink colour as a newborn. But as they grow, their black and white colour begins to appear gradually, thereby replacing the pink furs.

With their black patches, these large bears can hide successfully in forest shades while seeking food. Thanks to nature!

Are There Pandas Without Black Spots?

At birth, giant pandas usually have pink colour with a thin layer of white fur. In fact, if you’ve not seen an adult panda before, you will likely think the baby panda belongs to another species of panda. Surprisingly, the baby giant panda’s fur grows to white and black after a week.

There’s also another group of giant pandas with grey colour. Instead of the black and white colour that we commonly see on giant pandas, they have white and grey furs. As time goes on, about 4 to 5 months, the grey colour changes to black.

Another subspecies of giant pandas are the brown and white pandas. Unfortunately, only seven of these unique pandas have been seen since 1985 specifically in the Qingling mountains. There have been guesses that the colours of these pandas were caused by double recessive genes or a combination of genes. As of now, there is no scientific evidence to back up these claims.

Why Are Giant Pandas Black and White?

First, giant pandas have black and white furs to hide from predators and secondly, to communicate with one another in their environment.

As you know, giant pandas love bamboo and spend most of their life eating this diet. Unfortunately, bamboo contains little nutrition which doesn’t allow their body to store enough fat during the winter period. This means these large animals have to hunt for food all year round to prevent death from hunger.

Walking around their habitat, seeking what to eat, exposes the giant pandas to attacks from predators. But their white colour helps them to hide in the snowy environment while the black colour allows them to hide in shades or forests.

Findings also show that the black patches on the giant panda’s head help them to communicate with one another. Also, their dark eye patches may help them recognize one another, and the black ears may help to scare off predators.

Now we can say the black and white patches allow the giant pandas to survive in their different habitats.

Can You Get Albino Pandas?

No, you cannot get or own an albino panda but you can see one in China.

Currently, only one albino giant panda has been found in the world. Captured on the multiple infrared cameras by the Working National Reserve in China, the albino was seen passing through a forest. Its body was completely white while the eyes were red.

Scientists believe that the skin and eye colour can only be possible because of albinism – a rare skin condition that causes partial or total lack of skin pigmentation.

Albino pandas are rare to find but it doesn’t mean they don’t exist. Amazingly, the one found on camera in China was reported to be physically strong and walks perfectly. This means being slightly “different” doesn’t affect the albino giant panda’s performance.

In this article, we said giant pandas are a special kind of animal that do not have stripes or spots. But they have black and white patches that help them to communicate with one another and to hide from predators all year round.

Also, we mentioned that the black patches around the giant pandas’ eyes help them to recognize one another in their different habitats.

Furthermore, we discussed that there are giant pandas with other colours except white and black – pink, grey-and-white and brown-and-white. And we also talked about the only albino panda that has been found as of now.

I think you’ll agree with me that these large creatures are amazing and unique in their way. Find out more about their way of life in this article 29 adorable giant panda fun fact.