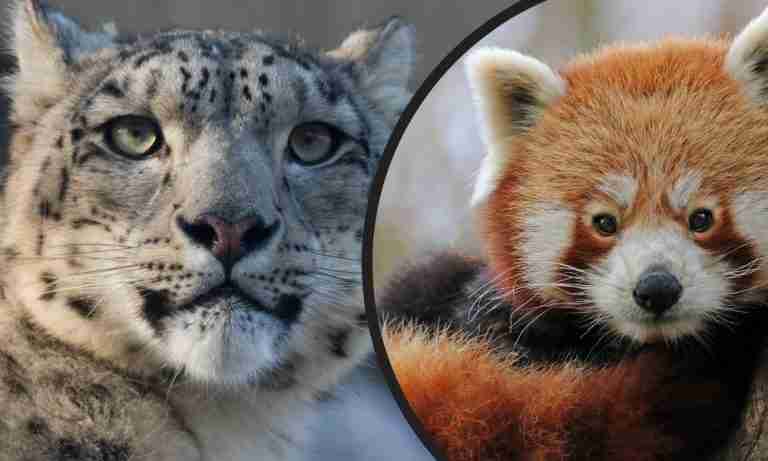 Just as the red pandas are predators of some animals, they’re also prey. When in the wild, these creatures are more vulnerable to attacks from carnivorous animals.

Sometimes, the martens prey on red pandas too. However, their babies often fall prey to snow leopards as they’re not yet mature to defend themselves.

At this point, you might be wondering why the snow leopards prey on the red pandas.

Keep on reading to learn more in this article.

Why Do Snow Leopards Prey On Red Pandas?

One main reason the snow leopards prey on the red pandas is that they share the same habitat in the wild.

Most of the time, these cuddly creatures live in areas with enough bamboo, water, and mountain forests. In addition, they prefer to spend all day on tall trees, sleeping and eating bamboo at intervals.

Even when the weather is extremely cold, the red pandas can survive well in it. With their thick fur, feet, and tails, they can tolerate freezing climates.

Considering their unique habitat and bodies, the red pandas do not have a lot of predators.

Unfortunately, the snow leopards also prefer the same habitat as the red pandas. They live in high-mountain, cold regions.

Despite living in the same habitat, red pandas and snow leopards usually stay away from one another. Naturally, the red pandas are solitary and peaceful animals that prefer to climb the tree than fight.

But when their paths cross in the wild, the snow leopards will attack and eat the red pandas, especially the cubs.

Snow leopards hunt red pandas the same way they attack other prey. Even if it is 50 feet away, a snow leopard can jump on and attack a red panda nearby.

Snow leopards are also highly skilled at camouflage, thereby preventing the red pandas from finding out that they’re around.

From the top of a mountain, the snow leopard carefully monitors its red panda prey. Once it is close to the target, this predator gently sneaks up on the lesser panda and pounces on it.

To ensure its slim chances of survival, the snow leopard holds down the red panda and bites its neck.

Generally, snow leopards prefer to hunt animals that are larger than them. Attacking and killing larger animals will ensure they feed well for several days.

However, this does not mean these large cats do not hunt small prey, including mice, rats, and squirrels.

Just like the red pandas, snow leopards are solitary animals; they love being alone. Hence, they hunt their prey individually and eat it alone. But a mother snow leopard will likely feed her cubs with the prey’s carcass.

How Do Red Pandas Protect Themselves?

Not only do the red pandas have strong jaws, but they also have sharp teeth and claws. Normally, these physical attributes are enough to scare off or fight a predator.

Still, the red pandas are solitary and peaceful animals that prefer to climb on trees than launch an attack.

But in a case where there’s no escape route for a red panda, its sharp claws serve as a source of defense. Standing on its back legs, it will appear larger and make funny sounds to scare its predator.

Another way the red pandas protect themselves is by using their sharp teeth. Aside from being able to crush hard bamboo parts, the red panda’s teeth can cut into the flesh of predators easily.

One simple way the snow leopards defeat the red pandas is by sneaking up on them before attacking.

Can A Red Panda Beat A Snow Leopard?

Well, it depends on the size of the red panda and its awareness of the snow leopard’s presence.

In a fight between the two animals, a fully mature red panda will likely harm the snow leopard. Even though it suffers a few injuries, the red panda will most likely survive too.

Apart from snow leopards, martens are another common predator affecting the population of red pandas.

Furthermore, humans also play a role in the reduction of the red panda population due to encroachment and deforestation.

Fortunately, there are now several conservation programs that have helped prevent the red pandas from going extinct.

Do you want to learn more about red panda predators? Check out this article – Do the red pandas have any predators?