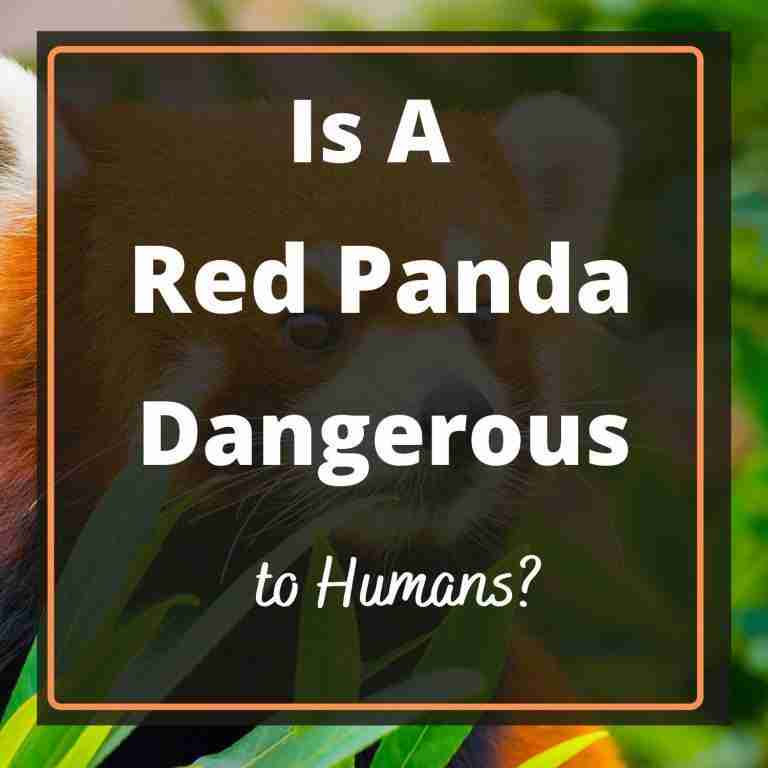 Amazingly, the long bright tail and brown-reddish fur of a red panda can be so irresistible and tempting!

Just imagine taking one or more of these cute creatures home as pets.

But before you get close to one, consider this important factor first – Is a red panda dangerous to humans?

The simple answer is YES, red pandas can be dangerous to humans and cannot be domesticated.

Nevertheless, in some countries like India and Nepal, some people have taken the step to domesticate red panda bears.

Despite them taking this step, these animals are NOT pets, and it is even illegal to domesticate them or trade them in most countries worldwide.

Why are Red Pandas Dangerous?

Here are 7 main reasons why red pandas are dangerous to humans:

1. Red Pandas Can Be Naturally Aggressive.

This point is the first and most common point when it comes to red pandas. Everyone knows that these kinds of pandas are cute and attractive.

But these mammals can get so irritated most of the time. They can suddenly get restless and attack people.

These red panda bears’ aggressiveness gets clear when they make quacking and huffing sounds.

Their different body language is also clear when it’s time to attack. This kind of move is all aimed at threatening.

It is now clear that natural aggression in red pandas comes by when they get irritated.

Often, the irritation comes due to stress which is triggered when the mammal misses even the slightest of its top requirements.

This kind of aggression can be so harmful, especially if a human is near at the time.

Naturally, the red panda bears have very sharp claws. Primarily these claws are for tearing bamboo for food and climbing trees.

But when the red panda gets cornered, it will tend to use this sharp claw for self-defense which may prove to be harmful at some point.

Also, the red pandas have retractable legs, just like cats. Due to this, these animals can stand up on their two back legs.

This would be a move for proving more aggression towards an enemy.

This single movement would make them appear much more significant and fiercer.

After standing, the red cat-bears can jump on something and climb up or down headfirst.

These sharp claws cause injury to their enemies, and because the animal does not know about too much affection, it can mistake a caring human for an enemy and cause injury.

Therefore, you would want to maintain your distance if you ever see a red panda standing on its back legs.

3. Red Pandas Love To Be Alone

Unless it is the breeding period, red pandas are known to be very solitary. This explains that red pandas don’t really like to be near people. They often spend their day sleeping or eating bamboos alone.

Therefore, keeping a panda would be interesting for you but not much for them. In that way, they would be unfriendly to you and may cause an attack.

Believed to be a former carnivore, these cuddly lovely-looking mammals have very sharp teeth both in the front and back.

These teeth can cut into flesh very quickly. Red pandas’ teeth have the support of powerful jaws that can increase injury to their enemy.

One primary function of the jaws is to crush strong bamboo stems for food as a form of adaptation.

During an attack or when these animals feel threatened, they will bring the jaws and teeth to act as a form of self-defense.

These fox bears have fully packaged mouths to act as a weapon when it comes to self-defense. Whenever they feel threatened, the red pandas do not hesitate to use it.

On some occasions, a slight bite from a red panda could be so harmful to you.

One of the hobbies of the red pandas is climbing heights. It could be trees, rocks, and many others. But another reason for climbing is for self-defense or proving aggression.

Being good at climbing, these mammals could get up on you before using the other parts of their body to perform an attack.

This factor explains why a red panda can jump and climb on a human and cause injury. Sometimes the damage may be intended by the red panda or not.

This injury could accelerate due to the possession of a hidden thumb on their wrist known as the “false thumb.”

This thumb is naturally an extension of their wrists. The thumb helps the mammal to grasp onto objects and prey tightly.

During an attack, the red panda increases its agility by the use of this extended thumb.

In other words, the mammals may climb on you without the intention of causing harm. But due to their natural features, they would just end up doing it anyway.

Male red pandas produce a strong foul smell. A major purpose of the strong smell is to mark their territory.

The scent glands on the base of their tails are responsible for producing this kind of smell.

When the red pandas get scared and threatened, they never waste time releasing this bad smell. The smell can be so harmful to you that it can lead to allergies.

Therefore, this kind of foul smell could be a threat to your health.

Lastly, in almost all the countries around the globe, it is illegal to tame a panda. These mammals are considered a highly endangered species.

Therefore, governments have put in place heavy penalties for those found on the negative side of this law.

Disadvantages of causing harm to the fox bears or trafficking them include hefty fines and long jail terms.

Therefore, you would not want to fall on the wrong side of the law by taming a red panda.

This point makes a red panda dangerous to humans in that it can affect a person’s freedom.

Can Red Pandas Kill a Human?

Yes, red pandas are capable of killing humans, even though it is rare. This result may come up mainly if the red panda attacks a child or people who cannot defend themselves.

Unfortunately, the injury caused could be bad and could lead to death. These few facts explain that a red panda can kill a human at some point.

In this article, we’ve learned that red pandas can be dangerous.

It could cause physical injury to you leading to a lifetime disability or even death. On the other hand, if you harm the red pandas, you could also be punished by the law.

With these statements, you get to understand that owning a red panda has more negative results than its cuteness.

Therefore, it is wise if you always stay away from them, and just admire the cute bears from a distance.

By making this move, you will have saved yourself from the 7 dangers above.

Moreover, you will also help in maintaining the natural habitat of the red pandas resulting in a win-win situation for both you and the mammals.

Did you find this article helpful? Feel free to share it with your friends.