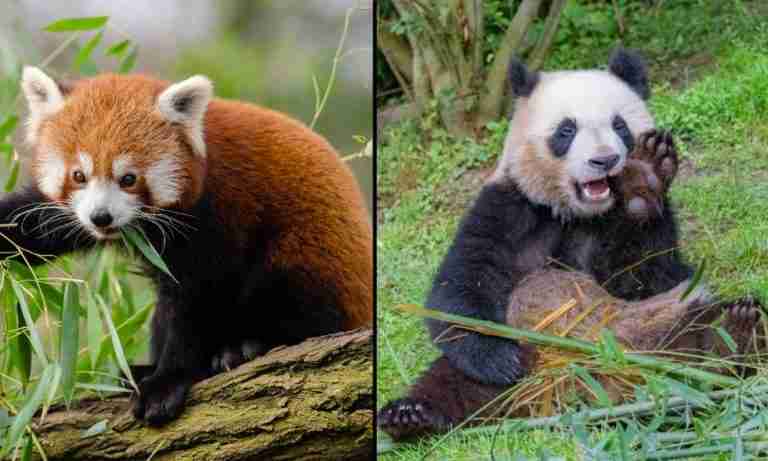 Most people think that red pandas and giant pandas do not get along. But you may think the opposite.

So which is correct – do they get along well or not?

Here’s what I found out.

If you are wondering why red pandas and Giant pandas get along, let’s discuss them below.

2 Reasons Why Red Pandas And Giant Pandas Get Along

Both pandas get along well due to the similarity in their food and eating habits. Both species feed on bamboo as their major source of food.

There is an ecological principle concerning the living conditions of the pandas. It is believed that both species of pandas can not live in the same habitat.

This is because they share the same food source; bamboo. However, this principle is not true.

The two species of pandas were separated by evolution a long time ago. This separation took place about 40 years back.

Therefore, one is right to say that both species are barely related. However, the red pandas and giant pandas share similarities in their food source.

A close examination of the eating habits of both species shows that while the red pandas feed mainly on the leaves of bamboo, the giant pandas feed on tough stems.

We’ve found fundamental, based on the structure of their skulls, they cannot eat the same things. This results in the peaceful coexistence between the red pandas and Giant pandas.

In ancient times, the red pandas and giant pandas had larger territories where they lived. However, the panda population is slowly going into extinction, reducing the territories.

The red pandas exhibit tolerance for high-altitude regions and can withstand cold temperatures more than giant pandas. This does not prevent them from coexisting in similar habits.

The red and giant pandas can be found in the Sichuan mountains.

Do Red pandas Live with Other Red Pandas?

No, red pandas do not like to live with other red pandas. The red pandas like to keep to themselves at times, and can only be found traveling in pairs.

Naturally, the pandas are quite fragile at a young age. Due to their weakness, they spend more time sitting on the trees as a form of survival.

This way, they become used to staying alone even as they grow older. That is why the pandas prefer to live alone.

Do Red Pandas Get Along with Other Animals?

No, red pandas don’t get along with other animals. This is because of their solitary nature.

They just prefer to live alone. You can’t see a red panda playing or interacting with other animals in their habitat.

They don’t even get along with themselves. The only brings two red pandas so close to another is the mating season.

After this, they go back to live their solitary lives. If they can’t get along with their kind, being around other animals is something they won’t even do at all.

In this article, we have learned that red pandas and giant pandas get along. This is true even though they are two different species.

If you found this article interesting, don’t forget to share it with your friends!