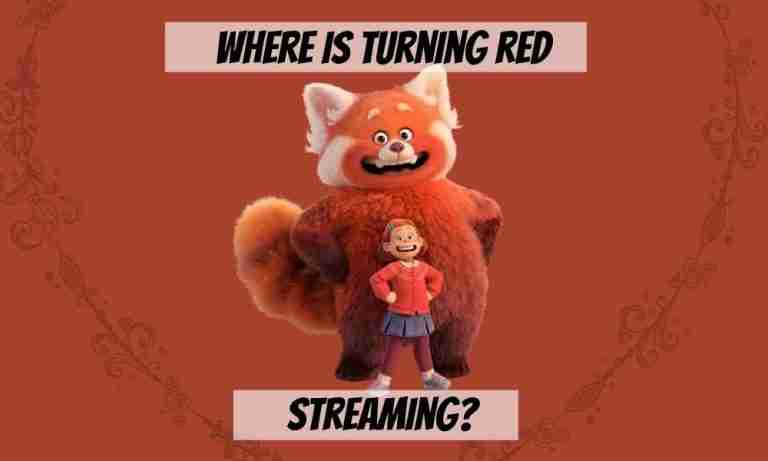 So If you are thinking of where Turning Red is streaming,  we’ve got you covered!

Quick answer – Turning Red is currently streaming on Disney plus.

You can now tune to the Disney app and watch this heartwarming and exciting growing-up movie.

It is directed by the award-winning writer Domee Shi, produced by Lindsey Collins, and is only available for Disney subscribers on Disney+.

You might want to know if you can watch Turning Red on other streaming services.

What Service Streaming is Turning Red On?

Turning Red is on the Disney Plus streaming service with a monthly and yearly subscription of $7.99 and $79.99 respectively.

The service streamer is accessible through internet support or connection for residents of the following:

With a mobile phone, game consoles, and desktop search engines, the “Disney’s direct to customers” streaming service can be accessed.

Can I Watch Turning Red On Netflix?

No! You can not watch Turning Red on Netflix streamer.

Though it topped Nielsen’s weekly streaming chart in its debut by collecting 1.7 billion viewing minutes.

And surpassed the view minutes of “The Adam Project ” which collected 1.34 billion minutes on Netflix even as they were released the same day (11th March).

But it is not yet a selection option on Netflix because it has not been listed there and also no date is officially announced for it to be listed.

Thus, lovers and viewers of Turning Red can only stream it on Disney plus.

There’s no need to bother about turning into a big red panda anytime soon on Netflix because Disney studio has not taken any steps to show that they will release it shortly.

Is Turning Red On Prime Video?

Turning Red is presently not available for streaming on Amazon Prime Video.

Even with your prime video subscription, you cannot watch Turning Red because it is not released on the platform for now. Nevertheless, It is exclusively available for online streaming on Disney plus arena.

The moviemakers and administrators have not given it all away for viewers to stream on any platform of their choice. They can only watch it on the stipulated app.

Regardless, Prime video contains a wide range of recent movies for viewers e.g The Raid: Redemption, Train to Busan, etc.

Is Turning Red On Disney Plus Free?

Turning red is available for streaming only on Disney plus but not for free.

Unfortunately Disney Plus does not offer a free tryout session to new subscribers any longer.

But a yearly subscription comes out cheaper than engaging the monthly plan – so that is something to assess if you want to sign up.

Viewers can watch Turning Red on their TV, smartphone, laptop, and any other available streaming device at the same time.

They can download titles to watch them immediately or put them together as a group watch or a movie night in the comfort of their homes with no additional cost.

Only Walt Disney World or Disneyland workers can stream freely on the Disney+ application because of the default Disney account they own.

Furthermore, this offer does not only include Disney Plus but also awards them unrestricted access to ESPN Plus and Hulu.

Regularly, this benefit goes for $13.99 monthly, but thanks to this bonus, everything is just free.

Where To Watch Turning Red Online For Free

As much as Disney plus does not offer you a free session on its own, there are a few hack methods you can use to watch turning red online for free and also minimize your yearly or monthly charges.

Let’s read them below!

Verizon Wireless gives a one-year unlimited subscription to customers of Disney Plus streamer with the limitless bundle for a fixed duration.

They also offer free subscriptions to anyone who changes from 4G to 5G Home Internet. After one year, you are now expected to watch Disney Plus movies at the normal rate of $7.99 a month.

So, If you are a Verizon subscriber, you are qualified for the “Disney Plus On Us” discount, which earns you a free six months of streaming on the Disney plus app.

To enjoy these offers, Sign-up for the deals with your Verizon plan, then go ahead and stream turning red for free on Disney plus.

An annual subscription, for example, will save about $16 for you yearly.

On the other hand, with the monthly subscription, you can try first before committing to Disney Plus.

You can opt-out ( cancel) and join again any time you consider it fit for you.

You now know where Turning Red is streaming.

The movie is presently available for watching on Disney plus. Fans can watch it for free with their regular Disney+ subscription ($7.99); no extra charge is involved.

Currently, Turning Red is not available on any streaming service like Netflix, Prime video, etc, viewers would have to watch it on the Disney plus app only.

And if they don’t have a Disney plus monthly or yearly membership but have a Verizon subscription they can access the movie with it on Disney plus for free.